NAB 2016: Calrec Audio is touting a new rack-mounted product that allows live broadcast sound at a sporting or music event to be mixed remotely. 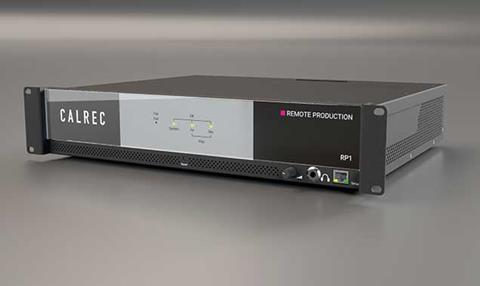 The RP1 is a 2U core device with integrated FPGA-based digital signal processing that enables a console surface at one facility to control all mixing functionality for an event or job taking place in a different location.

The RP1 manages all of the processing for IFB routing and remote monitor mixes locally with no latency, the company said.

“All these remote I/O resources appear to the main audio mixer like any other local I/O box, which means there is no operator learning curve,” explained Dave Letson, Calrec vice president of sales.

“This is a high-end broadcast mixing system in a 2U rackmount box, with the control surface in a physically remote location. The RP1 core allows remote sources to be patched to studio-based consoles and controlled as if they were physically located at the facility.”

The RP1 core embeds audio into existing video-transport mechanisms. It also has a modular I/O backbone that accepts any of Calrec’s I/O cards. Connections include: analogue, AES, MADI, SDI, and AoIP options from AES67, Ravenna, Dante, and SMPTE 2022.

Letson added: “Remote broadcasting using the RP1 means fewer resources are needed on-site. Controlling audio from a remote console saves money on setup time, crew, logistics, and equipment. It is simple to set up and very easy to use. It also enables broadcasters to cover a greater number of specialised events at significantly reduced cost, making it possible to maintain an increasingly wide range of content.”

Also at NAB, Calrec is showing Brio, a 892mm wide console with a 36 dual-layer fader surface. It is the smallest desk in Calrec’s Bluefin2 family.