Blackmagic Design has released a new version (V9) of its vfx application Fusion, including what it describes as a ‘state-of-the-art VR toolset’ with support for popular headsets such as the Oculus Rift and HTC Vive. 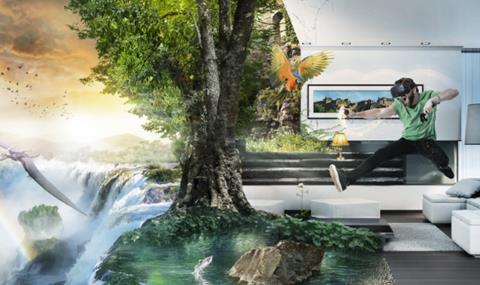 Fusion now has a 360-degree true 3D workspace for working in VR, along with a new panoramic viewer. GPU acceleration means “customers can wear a headset and interact with elements in a VR scene in real-time,” says Blackmagic. In addition, a new 360-degree spherical camera renders out complete VR scenes in a single pass and without the need for complex camera rigs.

Fusion 9 also features a new 3D camera tracker, which analyses the motion of a live action camera and reconstructs an identical path in 3D space. This enables users to composite elements with precisely matched movement and perspective of the original.

Furthermore, Fusion 9 has a new planar tracker that accurately composites elements onto moving objects in a scene. The planar tracker can be used to replace signs or other flat objects as they move through a scene and planar tracking data can also be used on rotoscope shapes.

The new features add to Fusion’s existing broadcast graphics capabilities, which include the ability to create 2D and 3D titles and logos, spline-based animation, vector paint functions and use third-party OpenFX plug-ins.

Blackmagic says the new version is a “major update” to its vfx, compositing, 3D and motion graphics software. It is available as either a paid-for version Fusion Studio or a free version simply called Fusion. Blackmagic has dropped the price of Fusion Studio from US$995 (£755) to US$299 (£225) as part of this new release.

Fusion 9 Studio provides unlimited network rendering – VFX houses can purchase and install Fusion 9 Studio on all their artist workstations and then install it on as many render nodes as they need, without any additional charges or ongoing maintenance costs.

“Fusion 9 adds the new features and tools customers have been asking for, supports more formats and newer workflows than ever before, has even more GPU and OpenCL acceleration, and a new dramatically lower price,” said Grant Petty, Blackmagic Design CEO. “Plus, the new collaboration tools and free unlimited network rendering will change the way large studios work.”