It’s a second consecutive win for the Yorkshire-set soap, whose most talked-about storyline of the year was Aaron finding the courage to confide in his mother that he was a victim of sexual abuse. 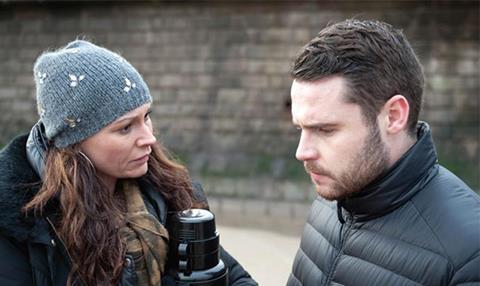 Judges praised the strong performances of Danny Miller and Lucy Pargeter (above) in the tough scenes, as well as their eye-catching direction and locations, with the wintry beach setting bringing a “Scandi drama” feel to the soap.

Writer Bill Taylor had the task of confronting the challenging subject matter in unflinching realism but in a way suitable for a 7pm slot.

Judges warmed to the lack of sensationalism in the quiet, intimate scenes and the childlike way in which Aaron conveyed the details of the story, triggered by his mother’s passing reference to fish and chips – a detail not present in the first draft of the script. The episode peaked with 7.3 million and marked the soap’s biggest social media moment of the year.

What one judge described as an “emotionally satisfying” episode was typical of the well-planned narrative of the soap over the course of the year.

Judges were united in praising its consistently high standards – indeed, one said it was “the most consistent of all continuing dramas in terms of both storytelling and acting”.

Casualty went all-out for its 30th anniversary, ramping up the action – an air ambulance carrying Grace crashes into the hospital after it is hit by a drone – for a 97-minute special that attracted 6.5 million viewers. Charlie’s surprise party, complete with cameos from some familiar faces, ensured there were also plenty of heart-warming moments.

The death of Corrie regular Kylie Platt after six years packed “an emotional punch”, our judges declared, with its stark, everyday and realistic treatment helping it stand out from other soaps’ typically more sensationalist deaths. This was the year, in the words of one judge, that “Corrie got a bit of its mojo back”.

Peggy Mitchell’s farewell was by turns “fitting”, “hallucinatory”, “audacious”, “a treat for the viewer”, “a bit ludicrous” and “surreal”, reckoned our judges – and was all the better for it. A ghostly cameo from Pam St Clement as long-time friend and sparring partner Pat Butcher was the icing on the cake of what one described as “the most fan-pleasingly ‘EastEnders-y’ episode in some time”.

Highlights of BBC One’s long-running medical soap this year included the death of Arthur Digby, Serena and Bernie’s kiss after 30 episodes of a blooming relationship and the arrival of Jac Naylor’s sister Jasmine Burrows as the new junior doctor – plus some crossover with sister show Casualty to mark the latter’s anniversary.

Still “the best-looking soap on TV”, according to our judges, Hollyoaks maintained its reputation as a pacy, slick and heightened affair with its nevertheless sensitive treatment of Cleo McQueen’s suffering at the hands of her paedophile step-father, which charity partner the NSPCC is now using in training.