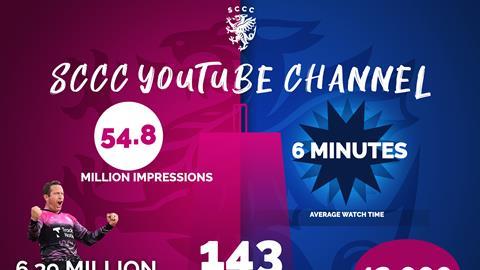 Despite its relatively small size, Somerset County Cricket Club has super-charged its YouTube subscriber numbers to rank as one of the most followed sports clubs in the UK.

The channel has amassed an incredible 152,000 subscribers (and growing) by transforming from a video dumping ground into an industry-leading network with a live-streaming operation at the forefront.

The number of subscribers is even more impressive when stacked against the capacity of the club’s stadium. With seats for 7,500, it would need more than 20 stadiums to accommodate all its followers.

Throughout lockdown, the club took advantage of the ability to stream fixtures via the YouTube Live platform to deliver community engagement. During the period when matches were played behind closed doors, the live stream and chat were the only way fans could watch.

“This totally blew me away,” said one judge. “The numbers are staggering. There is a genuine sense of community that really comes through on the channel, which feels engaging and authentic.

“You really feel like you’re part of something. The content is the perfect mix of sporting highlights and interesting stories.”

“Their passion for the game and what they are making is clearly evident,” said another judge.