“Director Maya Zinshtein couldn’t have picked a better year to go in with her camera.” 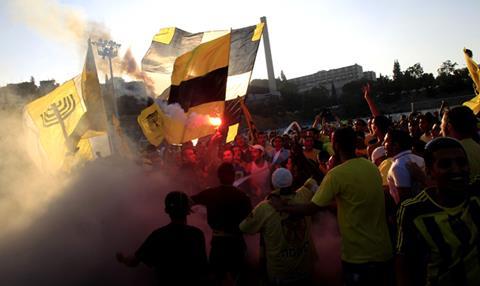 Director Maya Zinshtein couldn’t have picked a better year to go in with her camera. It is a sickening, brutal film that leaves you feeling numb and pessimistic, about the area, and humanity.
Sam Wollaston, The Guardian

Russian billionaire Arcadi Gaydamak bought Beitar and thought he could buy the fans as well and use them in his bid to become Mayor of Jerusalem. When that failed he punished them (or so it seemed) by signing two Muslim players from Chechnya. The fall-out was horrid to behold.
Matt Baylis, Daily Express

Yesterday’s penultimate episode was educative. You do not even have to like nature to enjoy it. You just need to enjoy storytelling. There is such confidence here that last night we were treated to watching grass grow.
Andrew Billen, The Times

Planet Earth II has been amazing us for weeks now, so long that we’re almost tempted to take it for granted. But every time you watch something new and spectacular, remember there’s an excellent reason why it hasn’t been seen on TV before — filming it was just too perilous.
Christopher Stevens, Daily Mail

Michael McIntyre’s Big Show beats The X Factor these days and Saturday’s edition helped to explain why. McIntyre spreads joy around the Theatre Royal Drury Lane in London. Where there is discord among the judges on ITV, on the BBC there is harmony among all.
Andrew Billen, The Times

My Mother and Other Strangers, BBC1

Over the past four weeks, this tale of a displaced Englishwoman has been working up a powerful head of romantic steam. No other recent drama has captured quite so keenly a sense of the complex, hidden, unspoken desires that can roil away beneath even the quietest surface. I can’t wait to see how it all unfolds.
Gerard O’Donovan, The Telegraph

Walliams & Friend once again felt like a show that’s been cobbled together with little thought for quality control. The scripts reeked of being dashed out, and any editing or process of refinement appeared to have been dispensed with, meaning even the best sketches went on too long.
Gerard O’Donovan, The Telegraph