“If you’ve made it to episode three, I guess you’ve put all questions aside and decided to enjoy it” 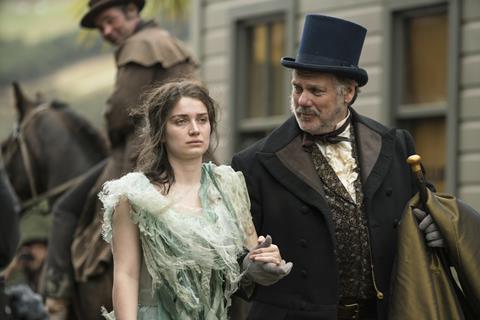 “If you’ve made it to episode three of The Luminaries, I guess you’ve put all questions aside and decided to enjoy it. The plot is overstuffed with characters. Of the men, only Crosbie Wells is anything approaching well-drawn, and holds the attention thanks to a charismatic performance from Ewen Leslie. The best thing about The Luminaries is the production design - they built Hokitika township from scratch, and it never looks like a set. It is the one aspect of the drama that shines.”
Anita Singh, The Telegraph

“Watching the first two-and-a-half hours was a bit like being in a drug-addled dream: coherent in some places, baffling in others — weird timelines, plot strings as clear as mud and the production seeming perfectly content with that. The acting, though, is good. Commendable given that the actors are carrying the handicap of a complex novel confusingly boiled down to six episodes by the author Eleanor Catton herself.”
Carol Midgley, The Times

While it sounds like your average inflammatory, exploitative true-crime documentary, this three-part series is actually a balanced and nuanced look at capital punishment and the moral complexities of justice in the US, and Texas in particular. For the first half of the episode, it is fairly true-crime-by-numbers. But the twists, though small, do come – and take the story in a new direction. In 1993, Texas changed its laws regarding jury selection.
Lucy Mangan, The Guardian

“This was a clip show hastily thrown together after the awards themselves were cancelled due to Covid-19. These awards may not have crossed your radar, but in short: they’re worse than the Baftas because the field is limited to five shows, but better than the Baftas because they have never been hosted by Stephen Fry. You can’t blame ITV for making this programme - the pandemic has decimated the schedules. But it wasn’t exactly riveting.”
Anita Singh, The Telegraph