“The Nightly Show fell as flat as a Shrove Tuesday pancake.” 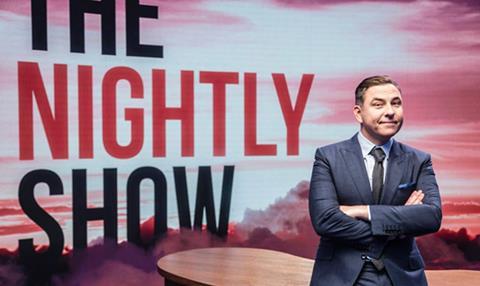 “James Corden and his fellow US talkshow hosts can sleep easy in their squishy Hollywood beds tonight because The Nightly Show, a British attempt to emulate what they do, fell as flat as a Shrove Tuesday pancake. In the process, it made such slick American TV productions look even better.”
Michael Hogan, The Telegraph

“For the comedy talk show’s debut, David Walliams proved the right choice, a nerveless pro whose first monologue was superior to James Corden’s most nights on the Late Late Show in America. If viewers had switched on for celebrity chat, however, they will have been underwhelmed.”
Andrew Billen, The Times

“If the first night proves representative, the show may struggle to equal, on any of its five nights, the level of star power that Graham Norton manages on his one. What Johnny Carson and David Letterman made an indispensable part of the American schedules showed, on its first outing, what a steep leap the format is in Britain.”
Mark Lawson, The Guardian

“Broadchurch is back on fine form, finally. After an implausible second series that struggled to deliver sensitive storylines with subtlety, Chris Chibnall’s popular drama has returned to its best.”
Daisy Wyatt, The i

“It’s brilliant by both Colman and Tennant again, a portrait of a close working relationship that is at times tetchy, at others bordering on close friendship, but always convincing and so very human. So far, at least, it’s a return to form.”
Sam Wollaston, The Guardian

“Acting of such intensity is a rare sight. This drama could be a disaster again — but the cast will do everything possible to turn it into a triumph. And that makes Broadchurch III too intriguing to miss.”
Christopher Stevens, Daily Mail

“This story felt fresh and after the ludicrous liberties taken with the legal process by the show in 2015, the attention to procedural detail at the sexual assault referral centre was both impressive and, at least to me, new. Broadchurch III got it off to a solid and possibly wisely understated start.”
Andrew Billen, The Times

“After the disappointment of series two, it looks like this superlative drama might bow out on a high. Prepare for your Monday night viewing – and Tuesday morning conversation – to be monopolised.”
Michael Hogan, The Telegraph