Design the look and feel of the show, from the brand logo through to the set and lighting design. 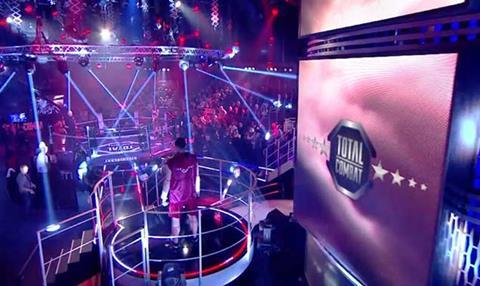 Brief Design the look and feel of the show, from the brand logo right through to the set and lighting design.

Dunlop Goodrich also produced and oversaw post-production of the elimination tournament where boxers take on their opponents and the clock, which affects the prize money on offer.

How it was done Executive creative director Daryl Goodrich said the new concept required a different look that combined the excitement of a boxing fight with the showbiz glamour of Las Vegas.

The series was shot at BT Sport’s London studio. Dunlop Goodrich utilised the facility to its full potential, using the large, central hub to display graphics and the fighter intro VTs.

The studio is surrounded by large vertical screens which were filled with ominous, stormy time-lapse cloud animations to create a dramatic, intense atmosphere.

The titles were created in Maya with compositing done in After Affects. The show was cut in Avid and mixed in Pro Tools.

Dan Merry was creative director, while Kimberley Allison was producer.

Louisa Fitch was art director and  while Toby Kalitowski was set designer.

Carl Singleton was editor and Wise Buddha looked after the audio post.