TV Critics: Back in Time for Christmas; Our Guy in Latvia; War and Peace; Simply Nigella; Inside Einstein’s Mind

“You could feel the ghosts of Christmas future gathering in advance of tonight’s second episode.” 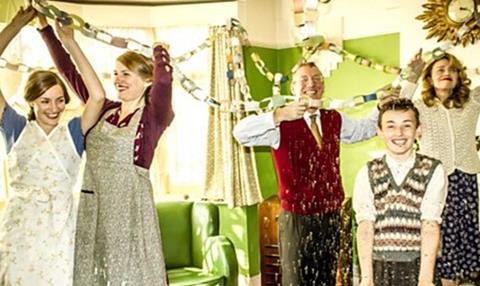 Back in Time for Christmas, BBC2

“There was impressive attention to detail. They got a retro home for each decade, pitch-perfect dress and historically accurate gifts…Women had a raw deal and it was conveyed well by the screen-friendly Robshaws who are the right proportions of thoughtful, funny and game for giving anything a go.”
Sally Newall, The Independent

“Retrospect brought some interesting moments….Back in Time for Christmas was not really about food at all. Rather it revealed very clearly how, in the three decades following the war, the emphasis of Christmas shifted fundamentally, from a quiet day of family rest and recreation to the beginnings of the full-on consumerist extravaganza we know today. Not the most original of findings, perhaps, but telescoped and time-capsuled entertainingly, it was a point well made.”
Gerard O’Donovan, The Telegraph

“All of these tortures were made into a thoughtfully nostalgic delight by the lovely Robshaws and by some evocative and well assembled pieces of social history, presented by Giles Coren and food historian Polly Russell. As I tuck into that breast on Christmas Day, it’ll be hard to forget the archive footage of that newfangled machine that could pluck up to nine turkeys in 45 seconds or Mum’s nerves as consumerism started lurking, like the Grinch that was going to steal Christmas and sell it back to you in an even bigger bow. You could feel the ghosts of Christmas future gathering in advance of tonight’s second episode.”
Alex Hardy, The Times

Our Guy in Latvia, C4

“Our Guy in Latvia is basically Who Does Guy Martin Think He Is?…Guy is not, he would admit, one to talk much about his feelings. No tears here, then, while wandering around the derelict church Grandad used to go to or meeting long-lost cousins. The connection is obvious, though - with a grandad he was obviously very close to (in a blokey, garden-sheddy, not-much-talking kind of way), and a new bond with a country he feels is a part of him.”
Sam Wollaston, The Guardian

“It didn’t help that the makers of this film clearly had the BBC’s Who Do You Think You Are? in mind, but possessed neither the resources nor the production skills to match it. The result was confused at best, the camera too much on Martin buzzing around the Latvian countryside in a vintage Lada, or wittering on over wartime archive footage about a period of history of which he seemed to know very little. The material not only lacked depth but the film’s scattered focus meant that grandpa Walter, the man, got lost along the way. All of which was a shame as there seemed to be a genuinely fascinating tale buried in the muddle. It just never made it out. Maybe one day Who Do You Think You Are? will take up the baton and we might get the full story.”
Gerard O’Donovan, The Telegraph

“This new War and Peace is lavish and, at times, breathtaking. Fans of British costume drama will never have witnessed anything before on this scale. In adapting a work of such weight, there was a danger that Davies could either assume too much prior knowledge of the viewer or, conversely, take too much time explaining the story of Russia during the reign of Alexander I and the build up to the 1812 French invasion by Napoleon. But in the early scenes he skilfully delineates all the major characters. The cinematography, too, is lush and inviting as the camera spreads over glowering mountains and vast, unknowable lakes…Ardent fans of the novel may feel the need to list various omissions. Yet a production of War and Peace that slavishly, obsessively followed the original is unlikely to be as irresistible as this.”
Ben Lawrence, The Telegraph

“Oh lovely Nigella. She lustily embodied Christmas excess, with her pudding of triple-cake and her cocktail of triple-booze…One thing, though: I wish she’d lay off the veg altogether. I don’t know if it’s some sort of BBC requirement, to make sure there’s enough roughage per TV hour or whether Nigella really does cherish her five a day.”
Alex Hardy, The Times

Inside Einstein’s Mind: the Enigma of Space and Time, BBC4

“The peg was the centenary of his big idea, but, come off it, this is the sort of stuff BBC4 loves any day of the week - and does well. There were some cute model train sets to explain his visual thought experiments, that even I could get my tiny brain around thanks to narration from David Tennant who took the tone of a dad explaining something complicated to his confused charge. There were some clever talking heads to deliver more of Einstein’s biography that zipped it all along. I found the little insights into his character the most interesting.”
Sally Newall, The Independent