“I could have done with more of the social work, less of the office japes and politics.” 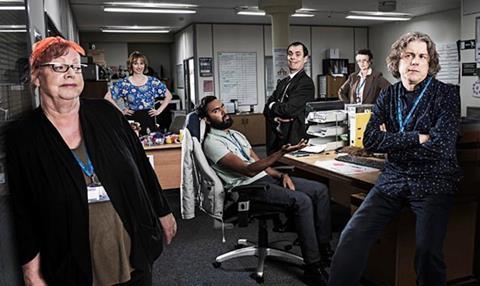 “I could have done with more of the social work, less of the office japes and politics, which has been pretty much covered. I hope in the coming episodes it will probe deeper, unearth darker secrets, and make Damned the genuinely original thing that Getting On was.”
Sam Wollaston, The Guardian

“Damned’s similar vérité style nailed the mundanity of office life neatly. I wished Brand and her co-writers had pushed things further. The script coyly danced around details of cases, presumably to keep things light, when it would have been braver to go in all guns blazing and produce something with the acerbic bite of Getting On.”
Michael Hogan, The Telegraph

“I just wonder if the horror, the jokes about the horror and Brand’s persona are becoming a little over-familiar. The sitcom suffers from the lurch of gear changes that were simply not there in Getting On, where the comedy grew out of the tragedy.”
Andrew Billen, The Times

“Moving, clever stuff tempered with a hefty dash of cynicism and swearing and featuring, as always, a main character who doesn’t give a stuff for the rules but does give a stuff about people. The curse of Damned is that it’s all been done already.”
Matt Baylis, Daily Express

“This is turning out to be a fine week for new comedy. After Morgana Robinson’s cavalcade of celebrity impressions in The Agency, Jo Brand returned with a stinging office burlesque called Damned.”
Christopher Stevens, Daily Mail

“Damned is the Twenty Twelve of social work. Brand, a former psychiatric nurse and the daughter of a social worker, has said she wanted to portray the tragi-comic side of the profession. Damned does just that, painting the whole social services department as laughably hopeless.”
Daisy Wyatt, The i

“It was a frenetic but deeply moving watch that celebrated the unsung heroes who rescue strangers every day. How the documentary makers managed to film some of the scenes was extraordinary – if not mysterious.”
Daisy Wyatt, The i

“Hell, it looks hard what they do: a cardiac arrest here, a shooting over there, suicide, stabbing, more stopped hearts, a big fire. If you’re told you don’t require an ambulance, it might just mean there simply isn’t an ambulance available.”
Sam Wollaston, The Guardian

“Despite its familiar plot, National Treasure feels more original with every scene. You may jib at the length of some of Coltrane’s speeches, but this is very clever television indeed.”
Andrew Billen, The Times