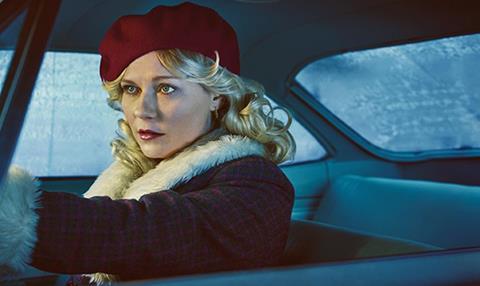 “It’s Fargo all over, in its look, and its atmosphere, black humour, white landscapes, in its chilliness spattered with human warmth. Excruciating, shocking and hilarious, it sends mixed messages to the stomach muscles; I’m tensing and squirming and properly belly-laughing, all at the same time. It’s bloody, bloody funny, and I can’t bloody wait for more.”
Sam Wollaston, The Guardian

“Bungling criminals. Blood-stained snow. A triple homicide in a Midwest waffle house. Ah jeez, it could only be the return of Fargo, the blackly comic crime drama inspired by the Coen brothers’ 1996 film. Set in 1979, this was a loose prequel to last year’s debut run which starred Billy Bob Thornton and Martin Freeman. As it’s an anthology series - all the rage on American TV at the moment (see also American Horror Story and True Detective) - it has a standalone plot, populated by a predominantly new cast of characters. Performances were universally excellent. Dunst and Danson were terrific but outshone by Wilson, who was winningly phlegmatic and wearily wise.”
Michael Hogan, The Telegraph

“As with both versions before, this Fargo’s violent outbursts are offset by delicacy and dark laughs. The 1970s backdrop is stylish and cinematic, a beautiful palette of blues and browns colouring the Minnesota backwaters. The details are intriguing and funny as everyday mundanity rubs up against big-picture menace. I didn’t buy into everything – did we need so many split-screen shots? We may miss Martin Freeman and Billy Bob Thornton, last year’s bad lads, but I’m already enamored with the crime family the Gerhardts – like an art-house version of the Mitchells. We’ve got nine more episodes through which to unravel the puzzle of accents, habits and garden-tool violence.”
Alex Hardy, The Times

“This grown-up, sitcom-style comeback for the Seventies icons was framed as a “making of” documentary – except we weren’t backstage at the variety show of old but at a certain porcine diva’s chat show: “Up Late With Miss Piggy”. With its eyebrows raised and a smirk on its lips, The Muppets spoofed mockumentary conventions. All very postmodern. The problem was that it was also low on laughs. Trying to tap into viewers’ nostalgia – stoked by two recent Disney film outings – this took aim at the wrong targets. We don’t want an archly adult take on our furry favourites. We want the joyous, giddy, crowd-pleasing, panto-esque romp that we fondly remember.”
Michael Hogan, The Telegraph

“It doesn’t serve them splendidly well. It’s like they’ve reunited to do The Office and in the process have made it too calculated to be joyous. Really, it’s the same ingredients as ever – Kermit, Piggy, celebrity turns, behind-the-scenes silliness – so it should work. Shame.”
Alex Hardy, The Times

“After last week’s zombie carnage this episode takes viewers back to the suburban streets of Alexandria, as the somewhat idyllic community is shaken to the core in the wake of an unprovoked attack. As violence sweeps through the streets, Carol, Maggie and Deanna lead a desperate attempt to defend the grounds. At the centre of all this is Melissa McBride’s Carol, who is on top form this week as she morphs from domestic goddess to masked vigilante in virtually the blink of an eye. Not only does she shift from baking to bashing skulls in virtually no time at all, but McBride also shows all the nuances of Carol’s journey as she fights to protect her friends.”
Alex Straker, The Independent

“Last night, reality series SAS: Who Dares Wins saw Green Berets putting civilians through the unit’s secret selection process – AKA “the world’s toughest job interview”. Eat your heart out, Lord Sugar. Thirty recruits arrived at a remote barracks in Wales, where they met staff Foxy, Ollie, Colin and Ant – big on black sportswear and tidily trimmed facial hair, not so big on smiling. The format felt far too familiar. Originality wouldn’t matter so much if it was brilliantly cast and paced. Thus far, though, there’s too much macho bluster (why no female recruits?) and too few engaging characters. Voyeuristically watchable but ultimately unmemorable.”
Michael Hogan, The Telegraph

“Saving the Cyber Sex Girls was a harrowing hour-long programme that every teenager in the UK should watch. As a woman, it made me grateful for the rights I so often take for granted – education perhaps being the most important. As one Filipino journalist explained, many of the abuse victims have no education and no hope of finding a job. Unlike their male counterparts they cannot do manual work. Sex work – cyber or otherwise – is fast becoming their only option.”
Amy Burns, The Independent

“Countrywise mostly seemed to consist of the presenters making a lot of noise. Heiney hollered at the swans to come get their breakfast while Ben Fogle, having being told to spook the Irish hares he was pursuing, began loudly yodelling. Liz Bonnin was a bit quieter, but even she started squealing at the sight of a basking shark. It’s no Springwatch, but Countrywise offered an easy way to pass half an hour.”
Amy Burns, The Independent