“The film seemed more like a hillbilly freak show, suggesting that trailer-trash, rednecks and vets self-evidently don’t mix with the American right to bear arms” 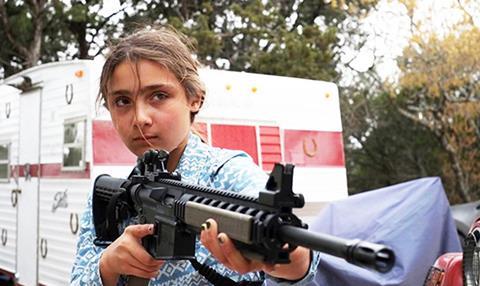 “It was obvious what reaction Kids And Guns was supposed to provoke. A trigger-happy child young enough to be in the Brownies, living in a caravan with enough firepower to take over a South American republic? We should have been horrified.”
Christopher Stevens, Daily Mail

“The most instructively emblematic strand of Francine Shaw’s documentary was the tragic tale of Hank, a nine-year-old who set off hunting on his own with his first gun, and was shot in the head when he tripped crossing a creek.”
Andrew Billen, The Times

“The film seemed more like a hillbilly freak show, suggesting that trailer-trash, rednecks and vets self-evidently don’t mix with the American right to bear arms, and so their children should never learn to use guns for hunting or competition. Instead of broadening our horizons with the oddity of abroad, it seemed to seek to narrow the view with home perspectives.”
Christopher Howse, The Telegraph

“This documentary… was not making the case for more gun control. Instead, it took a gently observational approach, giving us a chance to better understand those families who hold dear the right to bear arms. More dear, apparently, than the lives of their children.”
Ellen E Jones, The Independent

“It’s left to the viewer to yell at the television, as this one was: THERE’S NO SUCH THING AS A SAFE GUN, youth or otherwise, you numbskulls. With respect.”
Sam Wollaston, The Guardian

“Some subjects have instant shock value. Kids and Guns began with a clip of an American mother saying through her sobs that she wished she’d never bought a rifle for her nine-year-old son.”
Matt Baylis, Daily Express

“Rob Brydon narrated Beavers Behaving Badly with a fanciful whimsy that stopped being amusing and became thoroughly irritating within the first five minutes. In the end, I turned the sound off and just enjoyed the footage.”
Christopher Stevens, Daily Mail

“If I were one of the subjects of Beavers Behaving Badly I would be offended not only by the title but the general tone of David Johnson’s well-shot film, exemplified by his script, obligingly read by Rob Brydon, who ashammed his way through phrases even Alan Whicker might have crossed out — “aquatic rodent rascals”, “furry invaders”, “beaver Armageddon” and “act of arboreal anarchy” among them.”
Andrew Billen, The Times

“I like Noel Fielding’s comedy so much that sometimes I am embarrassed by its periodic bathos – attempts at jokes that trip and fall flat. But the hit rate is pretty high.”
Christopher Howse, The Telegraph

“Noel Fielding’s Luxury Comedy 2: Tales from Painted Hawaii is fun for all the family with a multicoloured set that Nickelodeon would deem too garish.”
Ellen E Jones, The Independent