“New Tricks had a good run, but its glory days are gone. Ending it was an act of mercy.” 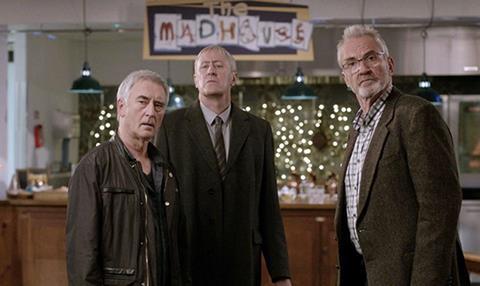 “Sasha Miller (Tamzin Outhwaite), head of the Unsolved Crime and Open Case Squad, was told to her astonishment that the unit was being shut down. When the end of Ucos was confirmed, by hard-faced assistant commissioner Cynthia Kline (Geraldine Somerville), Sasha was outraged. ‘But you can’t do that,’ she ranted. ‘After everything they’ve done. Everything Gerry Standing did. Sandra Pullman. Jack. Brian. All their efforts forgotten.’ ‘This is not the time for sentiment,’ replied Kline icily. And she was right. New Tricks had a good run, but its glory days are gone. Ending it was an act of mercy.”
Terry Ramsey, The Telegraph

“After 107 episodes and white ratings that, white in decline, other dramas would genteelly murder for, it ill-behoves a critic to spit on the grave of New Tricks, the arthritic detective limp that peacefully expired last night. And so we say farewell, with but one mystery unsolved. How, over a dozen years have so many fine actors been persuaded to give such bad performances?”
Andrew Billen, The Times

“Empire was dubbed the “hip-hop Dynasty”, which isn’t far off; but it owes just as much to more recent mono-titled night-time soaps such as Revenge or Scandal. In other words, perfect American TV: a delirious fantasy of capitalism and power where billions are tossed around like salad and murder and mergers go hand in hand.”
Richard Vine, The Guardian

“Oh, for my foolishness, God, strike me down now!” You’ve got to love a show that answers someone’s prayers by knocking them sideways with a car. Chewing Gum is a more high-concept proposition than Together, with writer-star Michaela Coel talking to camera, but it sells you from the start and never lets up. Coel plays Tracey, a 24-year-old virgin who flips on her religious views after uptight boyfriend Ron dumps her.”
Richard Vine, The Guardian

“New Tricks was the easy-crossword of sleuth shows. Lewis remains the cryptic. These Oxford whodunnits flatter us more genuinely, however, by the superiority of their acting, production values and dialogue.”
Andrew Billen, The Times

We Want Our Country Back, BBC3

“Jayda Fransen was the scarily articulate voice of BBC3’s We Want Our Country Back, a look at the rise of Britain First, the latest far-right party to capitalise on marginalised white, working-class communities in the UK. Britain First preaches Islamophobia, but insist it is not racist – a case Fransen was able to put across with alarming conviction. Aged just 29, law graduated Fransen was able to clearly communicate her party’s vision and galvanise support from fledgling recruits.”
Daisy Wyatt, The Independent

“Together, A new romcom from writer-star Jonny Sweet (Chickens) based on his Radio 4 show Hard To Tell. It’s an exercise in the mechanics of the “meet-cute” – Tom (Sweet) gets knocked off his bike by Ellen (Cara Theobold), and then spends the rest of the show trying to meet her again.”
Richard Vine, The Guardian

Born in the Wrong Body: My Transgender Kid, Channel 4

“This Channel 4 show was inevitably preaching to the already converted liberal-minded, but if modern parenting can help children to live out their true identities rather than bottling up their feelings, surely it is for the better. So long to the British stiff upper lip.”
Daisy Wyatt, The Independent