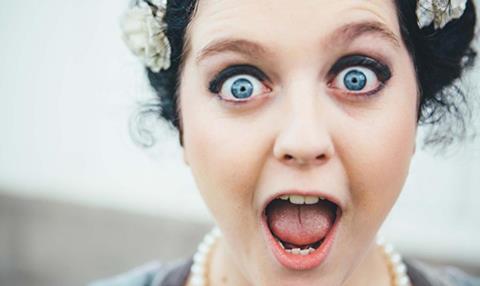 “Raised by Wolves waves the flag for both working-class intellectualism and Wolvo pride, leading to comparisons with the Manchester-set Shameless, but it has more in common with flashback family sitcoms like Everybody Hates Chris and Malcolm in the Middle. The difference, more radical than it should be, is that while those shows are from the point of view of teen boys, Raised by Wolves pulls back the shower curtain on female adolescence.”
Ellen E Jones, The Independent

“It is lovely that Raised by Wolves was upgraded from 2013 pilot to 2015 series, and I so want it to become Wulfrunian 30 Rock, Tina Fey’s feminist retool of machine-gun repartee à la Howard Hawks. But it isn’t yet.”
Stuart Jeffries, The Guardian

“Mainly, the world they’ve created is lots of bs- bright, brash, blinking funny and brilliantly realised. It would have been easy to make the show totally Caitlin-centric: instead it’s a true ensemble piece in which it’s the homeschooled Garrys against the world.”
Alex Hardy, The Times

“It’s about time we saw working-class people on TV arguing about books, thinking about the environment and deconstructing gender stereotypes. Although every one-liner was a zinger, the first episode didn’t build much narrative tension with Della troubleshooting every problem within minutes. But I’d put money on Della’s feckless father to generate more complex storylines in future.”
Helen Brown, The Telegraph

Kew on a Plate, BBC2

“This four-part series promised to be an all-the-year-round guide to growing veg in the Royal Botanic Gardens, but it couldn’t decide whether to concentrate on gardening, history or cookery.

It tried to do all three and failed at everything.”
Christopher Stevens, Daily Mail

“If you were hoping for step-by-step instructions on living the good life, it may have left you disappointed. If, however, you were content to enjoy a mouth-watering tribute to nature’s fecundity, then Kew on a Plate served up a generous portion.”Ellen E Jones, The Independent

“In trying to do so many god things, I fear, much of the goodness is lost. That’s a shame because, individually, all its ingredients are top-drawer.”
Matt Baylis, Daily Mail

A Fair Cop: A Century of British Policewomen, BBC4

“It felt like a very heavy book, detailed, thorough, wide-ranging, rammed with credible sources and, as a result, quite hard to pick up. From the laughable sight of WPCs employed to take hot coffee to the menfolk, to the grim treatment dished out to the Merseyside Police chief Alison Halford in 1990, there was much history covered. Too much than was fair, perhaps, to the subject or the viewers.”
Matt Baylis, Daily Express

“Like too many Beeb documentaries, it was tangled up in its right-on agenda, obsessed with proving how the sisterhood was eternally oppressed by male chauvinists. What producer and director Martina Hall failed to grasp was that in the police, PC does not stand for Politically Correct.”
Christopher Stevens, Daily Mail

“It chose to portray those on the receiving end of this new form of immeseration thanks to government callousness and private greed entirely unsympathetically as criminals, witless, and/or wastrels. It will probably win awards for the quality of its access, however mutually degrading that access was. Like absentee landlords screwing poor tenants for more rent, Channel 4 thus hatefully wrings every last drop of cruel entertainment from human suffering.”
Stuart Jeffries, The Guardian

“Tackling mental illness, drug addiction and dysfunctional families with a remarkable blend of compassion and hands-on problem solving, the letting agents featured in the first of Channel 4’s new series came across more like social workers than property specialists. The show ended as the bailiffs were called. No fingers pointed. But no answers found either.”
Helen Brown, The Telegraph