“Kemp’s occasional Partridgisms aside, this was actually a pretty solid documentary, blunt and informative, with impressive access to people and places.” 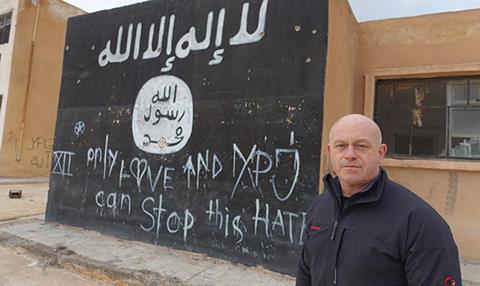 “Kemp’s occasional Partridgisms aside, this was actually a pretty solid documentary, blunt and informative, with impressive access to people and places. If you’re tempted to ask: why send Ross Kemp to northern Syria instead of, say, Jamie Oliver? I’d have to say it’s because Kemp is not just willing to go someplace where he can crouch under flying bullets. He really, really wants to.”
Tim Dowling, The Guardian

“There was hardly a minute of this gripping report, in which Kemp traversed the devastated landscapes of northern Syria and Iraq, when you didn’t feel anxious on his behalf. Kemp brought a reporter’s eye to whatever he saw. He put the Kurds’ historic fight for freedom into context. And while he’s not the most sophisticated of interviewers he does pose questions we might all ask.”
Gerard O’Donovan, The Telegraph

“This was not only immersive, as people say these days when something doesn’t make you reach for the channel zapper, it was iiluminating. Kemp has always denied being a journalist, but that is exactly what he is, and a good one.”
Andrew Billen, The Times

“This four-parter is clearly ITV’s stab at the long-form true crime re-investigation made fashionable by the American radio series Serial. There was a lot of fictional window-dressing in this true crime tale, including enough dramatic reconstructions to make a stand alone half-hour soap opera. But you know what? I still want to find out what happens next. And that’s probably enough.”
Tim Dowling, The Guardian

“Make no bones about it: this is exploitative gutter TV, sexing up real-life trauma for prime-time entertainment. I’d rather the whole dubious true-crime genre was relegated to the backwaters of late-night TV once more.”
Hugh Montgomery, The i

“The Investigator missed the psychological angles, but it laid out the evidence expertly, allowing us armchair detectives to follow our hunches and reach our own verdicts. That makes for compelling entertainment. ITV have a hit format here, a new way of presenting true crime stories.”
Christopher Stevens, Daily Mail

“Her daughter had asked for his help. That was an honourable start. What was far less honourable was the glossy sensationalism with which the investigation is being presented – jazzy reconstructions, visual effects to brighten up old photographs and an investigations set clearly modelled on Waking the Dead’s.”
Andrew Billen, The Times

“This isn’t entertainment or if it is it’s entertainment you feel uncomfortable about. It’s hard to watch because it’s so easy to watch. The story sheds layers like an onion: the staid, sober middle-class family life of the Packmans gradually revealing a darker core. I might not reach the end myself, not because this isn’t a gripping tale, but because it is a real gripping tale. The way it is told runs the risk of letting us forget that.”
Matt Baylis, Daily Express

“As a quiz, it’s over-complicated, with too many rules and rounds. The fun lies in watching the players mess up easy questions by showing off and shouting each other down. But this lot should be disbarred from real jury service for ever.”
Christopher Stevens, Daily Mail

“Like the Sixties, it just never quite lives up to its promise. The evil matron, the sexist doctors, the one good midwife, the boring parents, they’re all boomerang flat and they come back in every scene, never doing anything different.”
Matt Baylis, Daily Express