“Oh, Nigella, you can do so many things – except stop yourself from being so infinitely spoofable.” 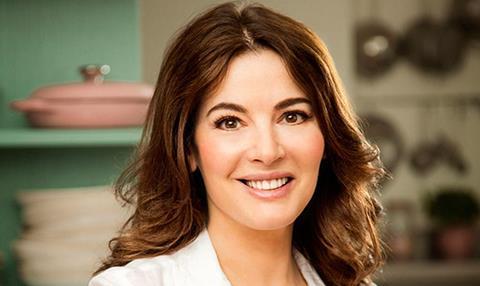 “There’s no direct talk of any recent turmoil, divorce, drugs, Italian assistants on trial. But these are recipes that relax and restore, uplift and enrich. There’s a feeling of healing, that happiness really can be achieved through the right combinations of flavours and colours and textures. Nigella shares a few holiday snaps, too, happy days in Thailand. If Saatchi is watching, she’s so very over you.”
Sam Wollaston, The Guardian

“This start-to-finish approach involved a level of lifestyle fantasy. Shots of Nigella’s handsome friends dining in her perfectly mismatched home were dotted casually throughout the show, and the episode opened with a trip to an independent grocer’s. Whether it was the weight of a favourite word in her mouth (“This bread is a name I love to say: Dinkelbrot”), or the sound of a spoon scraping against avocado skin, Nigella’s emphasis on sensuality at times veered towards self-parody, but it’s a tried and tested recipe that still works.”
Anna Leszkiewicz, The Telegraph

“How admirably/annoyingly (delete as appropriate) positive is Nigella Lawson? In her first series since her very public, very unpleasant public break-up from Lord Saatchi, she brushed off all that by purring: “I’ve settled into my new kitchen and where I am in my life right now.” Done. Dusted. Then she dashed off a handful of recipes in what is no longer really a cookery show but more a meditation, with soft-focus visuals and enough platitudes to write the next Eat, Pray, Love. Oh, Nigella, you can do so many things – except stop yourself from being so infinitely spoofable.”
Alex Hardy, The Times

Is This Rape? Sex On Trial, BBC3

“The fact that this show even exists is incredibly sad. We would all like to believe that teenagers – and adults alike – know that no means no. Or, as in this imagined scenario, a complete lack of participation in a sexual act does not constitute consent. But the longer it continued, with its weird option to “join the live vote at home”, the clearer it became that they really don’t. I’m not 100 per cent sure what BBC3 hoped to achieve by making this show, but if it was to highlight the terrifying lack of understanding that young people have surrounding their own bodies, safety and human rights, then it certainly succeeded.”
Amy Burns, The Independent

“Certainly, the idea of asking the public to watch a scenario and vote on whether they would call it rape is deeply problematic. Privileging an outsider’s perspective on a potential assault only intensifies a public discourse that would silence victims. The group still ultimately voted that the girl did not consent, that her assaulter knew she hadn’t, and that he should be prosecuted. But the programme repeatedly brought in ignorant, victim-blaming arguments and focused on the male perspective, repeatedly dwelling on how accusations ‘ruin a man’s life’. The one saving grace was that there were, on occasion, moments when rape victims in the studio were allowed to speak unchallenged.”
Anna Leszkiewicz, The Telegraph

“Oh no, I’m not shopping at Morrisons at all, until they change their insane policy of only selling cosmetically perfect veg, as highlighted in Hugh’s War on Waste. Not just Morrisons, of course: they all do it. Ha, they must hate it when Hugh shows up, cross about something, looking for a fight. Respect, Fearnley Wearnley, for taking them on.”
Sam Wollaston, The Guardian

“In his new campaign series, he and his fellow experts were getting rightly appalled by the amount of food we throw out. Overall, a third of what we produce isn’t eaten. Bread: 25 percent goes into the bin. Grapes: 20 percent. We’re better with biscuits: just 5 percent. Small victories. Fearnley-Whittingstall pushed at doors politely but firmly, giving KFC a hard time for wasting about a million chickens a year and standing outside Morrison’s handing out free ‘ugly’ parsnips. Garbage Man, he could be called, his superpower transforming rejected shopping into anything you like as long as it’s soup.”
Alex Hardy, The Times

“If you can’t survive without a weekly helping of cake tiers and tears, then Junior Bake Off may just help fill the void. Presenters Sam Nixon and Mark Rhodes were a bit of a poor man’s Mel and Sue, but the kids seemed to love them and this show was all about the kids – albeit some bloody precocious ones. That’s not to say they weren’t talented – they were, scarily so. The youngest contestant, Matthew, was just nine years old. Nine. And he made a near-perfect strawberry shortcake stack followed by an alien-themed piñata cake.”
Amy Burns, The Independent

“At times, it seemed too cosy for its own good; a world entirely inhabited by likeable optimists may be a pleasant place to live, but it’s not necessarily a formula for gripping television. This wasn’t helped by the production style; the colour-soaked aesthetic and snappy camerawork felt curiously at odds with the rhythm of the show. But After Hours was kept afloat by a raft of likeable, rounded performances; Tarpey in particular was consistently impressive as the hopeless, puppyish Willow. This love letter to pirate radio may be light on laughs, but it compensates with a bucket-load of charm.”
Tristram Saunders, The Telegraph