“She’s an outstanding impressionist and the Agency is her best show yet.” 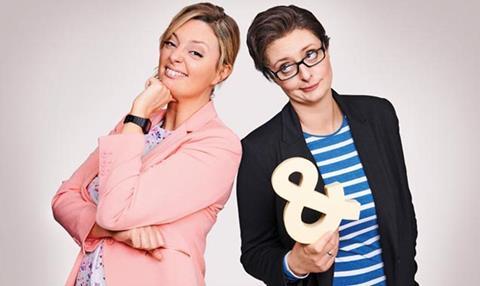 “Do you know what I want in this post-Brexit, Trump-elevating, reef-killing, antibiotic-resistant, strife-strewn pile of bollocks we call life? A laugh, that’s what. And God (who is dead) be praised, I got one – more than one – last night, from Morgana Robinson’s The Agency.”
Lucy Mangan, The Guardian

“She’s an outstanding impressionist and the Agency is her best show yet. With her fondness for a bawdy joke, Morgana is a 21st-century Dick Emery, but she could still learn from the master.”
Christopher Stevens, Daily Mail

“The mimicry was sometimes very skilful and she seems to have an uncanny knack of adapting her eyes into those of anyone from Adele to Gregg Wallace. But with political figures loopier than at any time since the 1980s, TV is crying out for an impressions show with an edge of satirical savagery.”
James Jackson, The Times

“Robinson is a very good comic actress who has built up a reputation as a celebrity impersonator on Channel 4’s The Morgana Show and Very Important People. This new vehicle though has far more misses than hits.”
Hugh Montgomery, The i

“I’ve never felt that Danny Dyer should be protected from mockery, but if you’re going to make a long-running joke about him, as Morgana did, don’t make it the one about him being thick. This was school bully stuff, not satire.”
Matt Baylis, Daily Express

“If your idea of relaxation is a downward-dog yoga position and a frighteningly long colonic tube, then this is the show for you. Nick Knowles is no hippy, though. So what could have been a superficial advert for the power of whale music comes with a welcome frown of scepticism.”
James Jackson, The Times

“The first colonic will actually be carried out next week, but the introduction to the equipment was enough to confirm my belief that the wellness industry is trolling the entirety of western civilisation.”
Lucy Mangan, The Guardian

“For writer Mike Bullen, whose talent is for eliciting keen emotion out of situations that his audiences relate to, middle age is the comic gift that keeps on giving. Cold Feet goes from strength to strength.”
Gerard O’Donovan, The Telegraph

“Writer Mike Bullen could do with going back to his classic early series of Cold Feet and binge-watching them, to discover what is missing in the revival. It isn’t difficult. The show has become so grimly miserable. The slapstick moments fail completely, because the tragedy overwhelms them.”
Christopher Stevens, Daily Mail