“A human zoo, basically, but you don’t have to feel too guilty about laughing.” 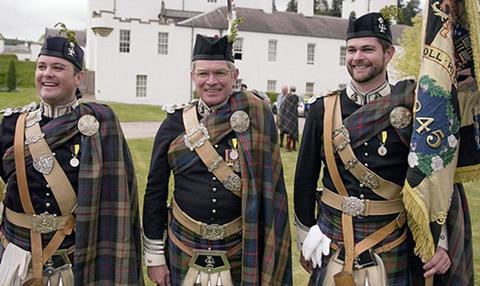 “It is a lovely programme by Michael Waldman, though – nicely non-judgmental, that is left entirely to you. I think the aristocracy – not just posh people, but proper top toffs – make excellent television, because they are so very different from anyone you come across in the real world, even the ones who do their damnedest to be normal. A human zoo, basically, but you don’t have to feel too guilty about laughing.”
Sam Wollaston, The Guardian

“Charming and fascinating as these glimpses into the still-privileged lives of others were, the film’s dogged insistence that British dukes were “a dying breed” did feel over-egged. At the outset we learnt that in 1953 there were 28 non-royal dukes. Now, 62 years on, there are 24. At that rate of attrition it could take centuries for the rank to die out. Rumours of extinction, one couldn’t help feeling, were greatly exaggerated.”
Gerard O’Donovan, The Telegraph

“If it sounds grand and eccentric, it sometimes was. The predominant tone, though, was often sadness. The St. Albans’ son described his ancestors’ history of madness and the weight of people’s perceptions as a ‘straitjacket’. I say: cast off the straitjacket but keep the coronets.”
Alex Hardy, The Times

“Scream Queens could well be my new Glee – i.e. a sad, middle-aged Englishman’s attempt to stay in touch with what young people are getting up to and saying on the other side of the Atlantic. It is actually created by the same people as Glee, and it shows, but this has the added bonus of blood. Kinda Glee (with Jamie Lee Curtis, the college dean, in the Sue Sylvester role) meets Mean Girls meets Carrie. It is outrageous, fabulous and hilarious, with the sort of confident, polished writing that you only really get in the US.”
Sam Wollaston, The Guardian

“Ryan Murphy is television’s most hyperactive ring-master. With hits such as Glee and American Horror Story he has honed an instantly recognisable style – a mish-mash of jump cuts and double-edged banter that is engaging in modest doses, exhausting if you’re not in the mood. Adding to the air of gleeful queasiness was a film-making style that reminded you of someone hopscotching through a Twitter feed – even when jokes misfired (which they often did), the speed with which Murphy bounded between scenes had an almost hypnotic aspect. Unlike anyone else in television today he seems to innately understand that he is competing not with rival shows but with his audience’s twitchy thumbs. Shiny, gory and whip-smart, Scream Queens thus attempted to pummel the viewer into submission with sheer, rictus-grinning relentlessness. And it worked.”
Ed Power, The Telegraph

“The cosy and sometimes idyllic world of Doc Martin often throws up peculiar scenarios, none more so than a cameo appearance by the star of the Alien film franchise, Sigourney Weaver. Playing an American tourist searching for her family roots in Cornwall, her encounter with Dr Martin Ellingham in the latest episode wasn’t so much enigmatic as evanescent – and verged on the bizarre. She appeared from nowhere, to pharmacist Mrs Tishell and proceeded to act out the sort of clichés of transatlantic boorishness that we haven’t really associated with American tourists since the Seventies. This did feel at times like a placeholder episode, the function of which was merely to keep things ticking over in the lead-up to next week’s season finale.”
Gerard O’Donovan, The Telegraph

“The three-time Oscar nominee turned up in Port Wenn for last night’s episode and was rewarded with a hugely underwhelming guest appearance. She got to bumble rather plainly around the chemist. The series is making the odd bold declaration as it heads to a climax next week – such as the doc and his wife facing the fact that they might be better apart. What a shame this boldness didn’t extend to the way they handled their visiting star. Her part, if given a medical diagnosis, would be labelled ‘anaemic’. Ho hum.”
Alex Hardy, The Times

“It remains frustrating to see Daryl, Abraham and Sasha stuck on zombie babysitting duty, but at least Andrew Lincoln’s Rick gets to flex his action muscles this week, using the unfolding drama as an opportunity to get some in some cardio and take out a couple of Wolves at the same time. Although viewers hardly need reminding, it’s good to see Rick back at his most desperate as he fights to live up to his position as leader.”
Alex Straker, The Independent

The Real Housewives of Cheshire, ITVBe

“The only saving grace in this blur of make-up and fake hair was Ampika’s “housekeeper” Lesley. Her responses were so sharp, so straightforward and so bloody correct that she should be employed exclusively to bring rich people back down to earth. Seriously, give this woman a show of her own – The Real Housekeepers of Cheshire would be an instant hit.”
Amy Burns, The Independent