TV Critics: Till Death Us Do Part; The Murder of Sadie Hartley; Ellen; The Night Of

“A half hour back in the company of Alf Garnett merely underlined that we’re lucky that Till Death has departed.” 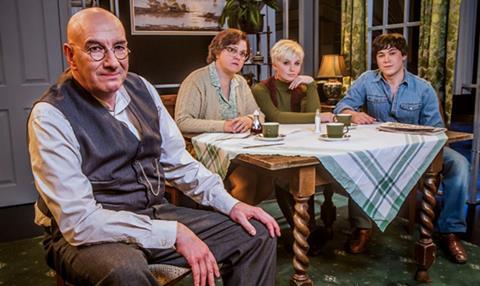 Till Death Us Do Part, BBC4

“Although Simon Day looked the part — bald, round glasses, waistcoat — and caught something of Mitchell’s hoarse stridency, it always felt like he was playing at being a bigot. His blokey archness was perfect for The Fast Show, but he was less well-equipped for the relative naturalism needed here.”

“A half hour back in the company of Alf Garnett, even played by an actor as affable as Simon Day, merely underlined that we’re lucky that Till Death has departed. Modern viewers expect so much more from a comedy. Some jokes, for example.”

“Thank heaven for the outstandingly funny Simon Day and Lizzie Roper. They performed a loving reconstruction, almost 50 years after the first screening. The BBC should remake at least a dozen Till Deaths.”

The Murder of Sadie Hartley, ITV

“It was every bit as dramatic and engrossing as the best crime serial, a mixture of the bizarre and the mundane. More analysis, and some sort of psychological explanation, would have been helpful. But perhaps there is none, beyond saying that both women were mad.”

“The most startling thing about it was how thorough this inside story of the investigation appeared to be. This programme showed that the truth, once again, was more jaw-dropping than any fiction could ever be.”

“By turns hard-hitting and dreamily escapist, this was a portrait of a girl who fled her grey reality on a council estate via solvents, vodka, cocaine, magic mushrooms and — ultimately — sex. Ellen was played with nuance and power by Jessica Barden, who has a good few years left in which she can convincingly play teenagers.”

The Night Of, Sky Atlantic

“The sharp-eyed television addict will recognise that it is based on the first series of the BBC’s also brilliant Criminal Justice, written by Peter Moffat. But Richard Price and Steven Zaillian’s adaptation more than justifies its existence and makes it a thing in its own right. A very excellent thing. With a hypnotic performance from Riz Ahmed.”