“It is purely old-fashioned entertainment of the kind I worried television had stopped making.” 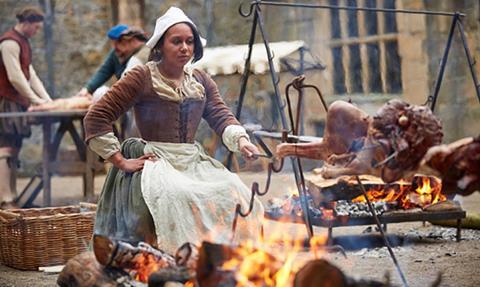 “It is purely old-fashioned entertainment of the kind I worried television had stopped making. It doesn’t pretend to replace real historical documentary but you can’t help but absorb information as the newly arrived household staff learn bowing and etiquette.”
Julia Raeside, The Guardian

“It wasn’t enlightening enough to be educational, nor was it amusing enough to be entertainment. A cockatrice of a show, stitched together for novelty value rather than flavour.”
Michael Hogan, The Telegraph

“With the show’s mix of role play, reality TV and educational content, Channel 4 has hit upon a truly engaging format.”
Amy Burns, The Independent

“A show that could have been open to ridicule and easily dismissed as yet another pointless celebrity vehicle actually turned out to be a lot of fun. I’m already looking forward to a spot of medieval jousting next week.”
Mike Mulvihill, The Times

“The set-piece where he smashed up his guitar for kindling was a step too far. They might be after the Good Life but don’t make this a sitcom.”
Matt Baylis, Daily Express

“If this was buried on an obscure cable channel, it would be forgivable but BBC Two? Abz-olutely not…Truly the TV silly season is upon us. The autumn schedules, when proper programming returns, can’t come soon enough.”
Michael Hogan, The Telegraph

“[Zeb] Hogan threw himself into every challenge and mud puddle with gusto – adding to the charm of this not-quite-slick-enough format. He doesn’t have the gravitas of Sir David Attenborough, the wisdom of Michael Palin or the sheer daredevilry of Bear Grylls, but his enthusiasm is infectious. And as his Thailand adventure drew to a close in Bueng Boraphet, you are left feeling incredibly lucky to have been invited along for the boat ride.”
Amy Burns The Independent