“Warren United lacks the space…in which real originality can grow.” 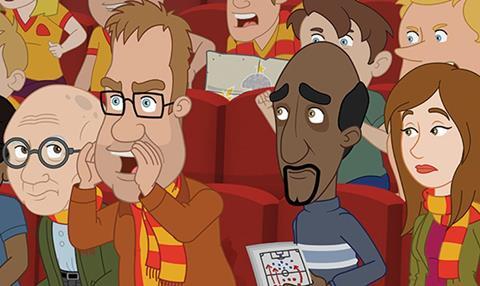 “If there were problems with Warren United, they were that the writing wasn’t good enough and the animation crude. I did, though, like the two police horses on the last match day of the season. A fine ambition, though this summer, thanks to the World Cup, there will be no gap for horses to work on neighs, still less for humans to say nay to football coverage. Tragic, really.”
Stuart Jeffries, The Guardian

“One hopes that over the coming weeks the rest of Warren’s family will become better drawn and the surreal touches, such as the talking police horses, will help induce the delirium missing from the first viewing. I just fear that with only six episodes in its initial run, Warren United lacks the space, and indeed the writers’ room, in which real originality can grow. It needs more zany.”
Andrew Billen, The Times

“This was always going to be the logical conclusion of the campy, trashy reality TV trend: a new eight-part docu-soap about the fabulous lives of Soho’s most glamorous “women”.  But it isn’t officially part of the Real Housewives franchise. Without a single catfight to speak of, this first episode was too ladylike by half. As unlikely as it sounds, Drag Queens of London could stand to be a lot camper.”
Ellen E Jones, The Independent

“Dialogue was burdened by filling us in on historical background or ruined by speechifying of the kind that no human being has ever addressed to another, least of all in a big-wigged clinch. I thought of the playwright Howard Barker and of how his great English civil war play Victory, through a creative love of dramatic language, took us politically and artistically to the places Flannery and Brant never reached.”
Stuart Jeffries, The Guardian

“The main interest of the episode was whether “ginger rottweiler” and company enforcer Thorpey could conceivably sustain a relationship with an impossibly beautiful but moody sales agent half his age, but Nev’s decision to punish the brothers by designing a pair of stocks for their bottoms was a cartoonish masterstroke that Warren United might note. Save Britain Money Ltd: the butt stocks here.”
Andrew Billen, The Times