“McDonald was far too reserved to ask the really cheeky questions.” Read on for the verdict on last night’s TV. 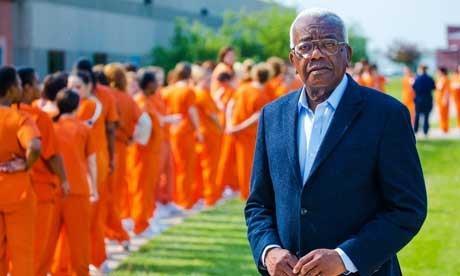 “ITV probably hoped its newsreader would loosen up once he got out from behind the desk, but that didn’t happen. The English accent was disarming enough to get interviews started, but unlike master of the form Louis Theroux, McDonald was far too reserved to ask the really cheeky questions.”
Ellen E Jones, The Independent

“McDonald’s interviewing style is naturally diffident, as if he feels awkward about probing too deeply. Among the male population of death row, this had been a major drawback as he was all too easily palmed off with macho bullshit. With the women inmates, it drew responses of extraordinary depth.”
John Crace, The Guardian

“It was a pleasure to see Sir Trevor McDonald at work on Women Behind Bars… McDonald is calm and polite as he asks his questions, but he doesn’t try to be anybody’s friend… By remaining neutral, McDonald allows both the interviewee and the viewer to project their own emotions onto him. It’s a brilliant technique.”
Christopher Stevens, Daily Mail

“You couldn’t help noticing that these convicted felons looked nothing like any felons on earth. They were almost other-worldy in their general innocence and politeness, like Amish women or characters from The Waltons.”
Matt Baylis, Daily Express

“It was all very awe-inspiring until the six-metre Burmese pythons turned up to provide comic relief. It’s hard not to lose respect for an animal so opportunistic it will swallow an alligator whole, even if that means rupturing its own gut in the process.”
Ellen E Jones, The Independent

“The photography was stunning but I’m not sure I learned anything more about these animals… A few more frames of animals doing animaly things instead of Steve Backshall changing in and out of his diving gear might have helped considerably.”
John Crace, The Guardian

“James was intriguing, in a sad way, but his story couldn’t fill more than a few minutes and nor could any of the others. After we’d met the tattooees what was left for the rest of the hour and a half next week? Not a lot, really, except watching ink dry.”
Matt Baylis, Daily Express

“The deepest insight came from Paul’s young son, Aaron, who liked to fill in the gaps on his dad’s tattoos with felt-tip pens. Asked what he liked best about colouring them in, Aaron said: ‘I get to wipe them off.’ Aged seven, he didn’t know how to say it, but he must have been wondering what his dad’s face really looked like.”
Christopher Stevens, Daily Mail