An Audience With Adele; Partisan; Doctor Who

“This programme requires needs a blockbuster musician, but also a consummate entertainer: a raconteur, an MC, a comedian, a natural host. Tonight Adele proves she can fulfil all those roles with her eyes closed – she is ridiculously quick-witted and radiates relatability” 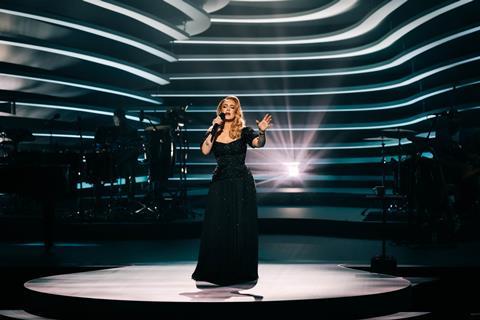 An Audience With Adele, ITV

“What becomes very clear very quickly is that this is the ideal vehicle for Adele. The musician is known as the mega-voice behind a raft of glacial, tear-jerking torch songs. She’s also known as a chronically no-nonsense, compulsively self-deprecating Londoner with a great sense of humour. This programme requires both. It needs a blockbuster musician, but also a consummate entertainer: a raconteur, an MC, a comedian, a natural host. Tonight Adele proves she can fulfil all those roles with her eyes closed – she is ridiculously quick-witted and radiates relatability.”
Rachel Aroesti, The Guardian

“The quality that came through during An Audience with Adele was her sheer, steam-rolling charisma. If her tearjerker power-ballads didn’t get you, nattering anecdotes about being pulled over by the police in LA while driving to the supermarket did the trick. This was the Adele the world had fallen in love with: melodramatic but endearingly earthbound. She sang like a turbocharged diva and chatted between songs in the style of a neighbour who’d poked their head over the hedge with some juicy gossip to share.”
Ed Power, The Telegraph

“Adele has always been a natural, showstopping entertainer even outside of her music: she is a quick wit, approachable, and open, clinging tightly to her working class London roots. So it grated a little that ‘An Audience With’ relies so heavily on rehearsed, chummy contributions from other celebrities. The crowd here was nauseatingly starry: Samuel L Jackson, Emma Watson, Boy George, Dawn French, Gareth Southgate, Stormzy. It was impossible to keep track of them in the crowd and their questions to the artist distracted from the show and revealed little.”
Sarah Carson, The i

“I’m guessing that Partisan either totally drew you in within the first five minutes or bored you. To my surprise, because I’m easily bored, I was in the former camp. Don’t get me wrong: I am weary of the Scandi noir tagvagn (according to Google that’s Swedish for bandwagon) and had there been much else available to review last night I might have switched off at the opening credits when a young girl, her hands bound with rope, was shown drowning in slow motion. I had a feeling this would be different, though (maybe the drowning was metaphorical?), even though a scary-looking man called Johnny (a very brooding, very watchable Fares Fares) collecting two teenage girls at the roadside with rope in his car boot did not bode well at all.”
Carol Midgley, The Times

“Partisan was a Nordic noir so dark, it was virtually a black hole. It began with a young girl, her wrists bound together by heavy rope, falling through the air, plunging headfirst into water and drowning. A few moments later we were treated to a song by Leonard Cohen, The Partisan. It almost lightened the mood. Partisan sustained a high level of tension throughout this first episode, which was full of threat and mystery. The first ten minutes or so featured more suspicious glances than a meeting of the England and Wales Cricket Board.”
Roland White, Daily Mail

“Weeping Angels in a Devon village circa 1967. A World War Two veteran helping the Doctor fight them off, armed only with a cricket bat and old-fashioned British pluck. What’s not to enjoy? Yet, this atmospheric episode of Doctor Who began brilliantly before disappearing up its own time vortex. The recurring problems of the Chris Chibnall/Jodie Whittaker era came back to haunt it. I was also left with a familiar nagging feeling of frustration.”
Michael Hogan, The Telegraph

“Village of the Angels is a high point in a so-far tepid, and often chaotic, series. In its most focused moments, it has the feel of a classic standalone Who story, with Jodie Whittaker’s energetic performance chivvying the plot along.”
Isobel Lewis, The Independent