”The chemistry – comic as much as anything – between Renner and Steinfeld is tremendous.” 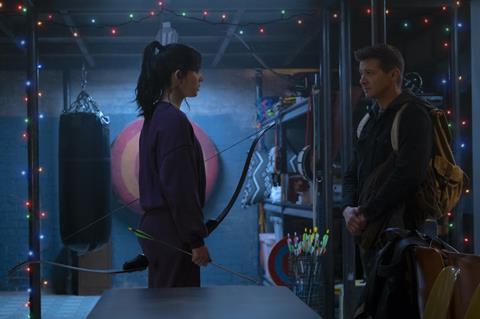 ”In this series, he is teamed up with a naive young sidekick, portrayed with screwball fizz by Hailee Steinfeld. Alas, her debutante enthusiasm only goes so far and Hawkeye hits the ground as a bit of a pedestrian muddle. It isn’t a disaster and never so bland as to make you want to switch off. But, for better or worse, it lacks the Wagnerian overkill that is a Marvel hallmark. Hawkeye’s budget is alleged to be an eye-watering $25 million per episode. However, it’s difficult to see much of this cash on screen in a series that is by far the most low-key of Marvel’s Disney TV shows to date. The action scenes are perfunctory, the dialogue glum rather than glittering. And the mentor-protégée chemistry between Renner and Steinfeld might be kindly described as a work in progress.”
Ed Power, The Telegraph

”There are positives to Hawkeye. The fight choreography is snappy enough, while there’s no dawdling over the plotting. Marvel releases are often numbingly indulgent in their maximalist save-the-world scope, but this is mercifully pared back. That said, there are plenty of recurring MCU bugbears. Visually, it’s drab and abjectly characterless, with the glittery aesthetic potential of its Christmastime-in-NYC setting utterly wasted. Frustrating, too, is its lack of ambition: yet again, here is an origin story, built on tired character types and motivational platitudes, as familiar as your own thumb (which will likely be hovering over your mobile screen for much of the duration of this series). Taken by itself, Hawkeye is a perfectly serviceable action romp. But when there’s so many of these things saturating the market, it needs to work a little harder to justify its own existence. Ultimately, then, Hawkeye misses its mark.”
Louis Chilton, The Independent

“The chemistry – comic as much as anything – between Renner and Steinfeld is tremendous. Renner has made a career out of being the uncharismatic second fiddle on the big screen – so uncharismatically on occasion that it has sometimes felt that the bluff really should be called. The translation to small screen suits him and his low-energy presence well. But it is Steinfeld who dominates. She sells the frustrated teen aspects of Kate…If the plot isn’t up to much – what little happens in the first two episodes is erratic and riven with holes that leave you taking a lot on trust and hoping backfill will begin soon – the characters are credible and worth a little more emotional investment than usual. Or at least MCUsual, although we are not in Wanda and Vision territory either.Hawkeye may not be a resounding bullseye but it hits the spot well  enough.”
Lucy Mangan, The Guardian

“I still love the pairing of Matt Lucas and Noel Fielding as presenters, whether they are pretending to kiss or distracting harried contestants from the task at hand. Their humour is just odd enough to temper the cuteness, and kind enough to stick to the spirit of the show. Channel 4 has ordered three more years of Bake Off, and I hope these two stick with it. As is often the way on cooking competitions, the finale is not really a showcase for the contestants’ best work. The pressure is too great, the stakes too high, the ideas just a touch too ambitious. What begins as a level playing field remains that way through most of the final, because nobody quite manages to excel…It might not have been as vital and soothing as last year’s lockdown-ish edition, but it still had its moments.”
Rebecca Nicholson, The Guardian

“This was a low-key final, quietly intense but largely free of incident. High stakes meant the bakers all made timing errors. The standard slightly disappointed. Across the series as a whole, Giuseppe was a worthy winner. However, the people’s champion was surely Chigs, flying the flag for lockdown bakers everywhere. God bless that banana bread craze.”
Michael Hogan, The Telegraph

“I don’t want to feed any conspiracy theories, but the German’s dominance was threatening to suck the excitement out of the competition. Only Giuseppe Dell’ Anno seemed able to match him for consistency, although the Bristolian-Italian’s “Mediterranean twists” had started to become as predictable as a package holiday to the Costas.”
Gerard Gilbert, The i

“All very spiffing, yet what elevates any such war history is also a bit of myth-dispelling; so far this retelling of the escape isn’t short of that. Notably, there were the descriptions of Stalag Luft III itself. Far from being some sadistic hellhole…Things are never quite so simple — another reality presented here was that only a third of prisoners actually wanted to get into any escape activity. But it made no difference to one’s basic reaction: awe at the audacity and ingenuity of the escape. You suspect the men’s fate will render Thursday’s episode quite moving. All in all, the kind of wartime mythology that makes even a minor Channel 5 retelling feel like one of the programmes of the week.”
James Jackson, The Times

“Television has many tricks at its disposal, but sometimes all you need to make a gripping documentary is a gripping story. This was one of those instances…But this first of three episodes was packed with fascinating detail”
Roland White, Daily Mail

“Terera is astonishing as Delroy, conveying his fear and frustration with the world, along with the dopey excitement of becoming a new dad. Maskell is similarly magnetic as the cheeky, emotionally immature Michael. The film tackles knotty themes of race, identity and toxic masculinity but is also extremely funny (Michael’s awkwardness at walking in on his sister breastfeeding is compared to “Priti Patel at a Snoop Dogg gig”). As director, Dyer relishes the potential of film. Close-up shots are perfect for capturing Michael and Delroy’s quietly combative meeting, while cinematic flashbacks underline how long-held the resentments between the pair have been. I can, however, imagine the story being confusing if you haven’t seen the previous plays, even if the film is meant to stand on its own. Still, Face to Face is deeply accomplished and not just because it manages to touch on practically every one of the year’s hot-button topics while only ever feeling like a believable portrait of a friendship. Brilliantly conceived, exhilaratingly performed and, as Delroy and Michael gradually work through their grievances, bursting with hope.”
Gwendolyn Smith, The i