Along for the Ride; The Princes and the Press; Royal Bastards

“As a swooping drone camera framed the Kent countryside as the modern equivalent of Tolkien’s Shire, the pair were like a duo of comedy hobbits, spinning light entertainment gold from an unlikely blend of rapid-fire gags and mindful rambling.” 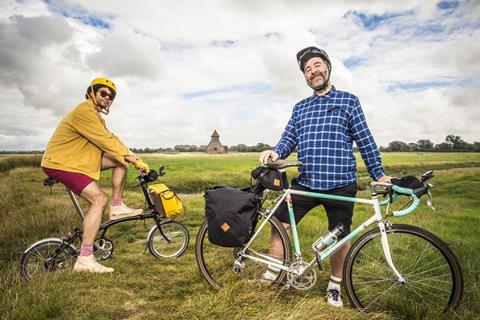 Along for the Ride, Channel 4

“David O’Doherty is the host of this weekly new series and he couldn’t have picked a better first guest than the gentle-voiced, ultra-dry Richard Ayoade, who is impossible to dislike, even though he had a good try by wearing monstrous yellow serial-killer gloves and matching helmet. It did feel terribly contrived when he had to be ‘rescued’ by Ayoade while stuck upside down over a stile, but it was a perfectly pleasant, mildly amusing hour.”
Carol Midgley, The Times

“Future episodes will see O’Doherty team up with Grayson Perry, Mel Giedroyc and others, but it’s a shame he and Ayoade don’t have an entire season to themselves as they were an engaging study in contrasts. As a swooping drone camera framed the Kent countryside as the modern equivalent of Tolkien’s Shire, the pair were like a duo of comedy hobbits, spinning light entertainment gold from an unlikely blend of rapid-fire gags and mindful rambling.”
Ed Power, The i

“Along for the Ride is so stripped back in format and laid-back in tone that, even with Ayoade on board, it coasts. Whereas Travel Man has gags packed tighter than a corporal’s carry-on luggage, O’Doherty isn’t going for hilarity here so much as a diffident ramble. Even the scenery, from Winchelsea in East Sussex to Dungeness on the Kent coast, is just unassumingly pleasant countryside escapism. Along for the Ride is unapologetic about not needing to take us anywhere. But its simple pleasures – exercise, the great outdoors, intermittently amusing badinage between two blokes you’ve seen on a lot of other, similar shows – aren’t quite enough.”
Jack Seale, The Guardian

“Your enjoyment of this episode will have depended largely on whether you like Ayoade’s brand of deadpan, dorky humour, and the fact his whole act is one long audition for a Wes Anderson film. It’s amiable stuff and watching them pootle along is quite a relaxing experience. Every so often, they’ll have a mildly amusing exchange. But you can’t escape the feeling that it’s a poor man’s version of Mortimer and Whitehouse: Gone Fishing.”
Anita Singh, The Telegraph

The Princes and the Press, BBC2

“The Princes and the Press, on the evidence of this first episode at least, contained no bombshells. Instead, presenter Amol Rajan led us through what we already knew, albeit with some canny insider takes from the royal press pack. One of the factors that marks out Rajan from his peers is his relaxed presenting style. If he leaned back any further in that chair, he’d be horizontal. It makes his fellow news presenters seem stuffy by comparison. He’s also very smart, but this programme wasn’t his finest work.”
Anita Singh, The Telegraph

“Ultimately, Rajan’s programme eloquently if unwittingly made the case for the republicanism he once overtly espoused. Royal journalism, as he showed it in action, does the opposite of exciting reverence: rather, it places its hand gently on the backs of Britons’ heads and pushes our noses deep into the royal family’s dirty linen. Everybody involved gets degraded by it.”
Stuart Jeffries, The Guardian

“This is a story so familiar it seems impossible to make fresh. So hats off to this drama-documentary team for doing exactly that. This opening episode told in a punchy, zippy, grisly and very sweary way how the child bride Margaret Beaufort gave birth at the age of 13 to a son, Henry, who would start the Tudor dynasty. The reconstructions were classy (and gory) and the historical fact was simply described, yet not dumbed down, which is a difficult balance to strike.”
Carol Midgley, The Times

“Royal Bastards: The Rise Of The Tudors was basically Game Of Thrones produced by your history teacher. There was plenty of blood, the occasional beheading, and quite a lot of swearing, even from Queen Margaret of Anjou. The budget for chainmail alone must have been eye-watering, but this action documentary did explain clearly and dramatically what happened during one of the most complicated episodes of English and Welsh history.”
Roland White, Daily Mail