“Wallace’s manic enthusiasm is the hallmark of Inside the Factory” 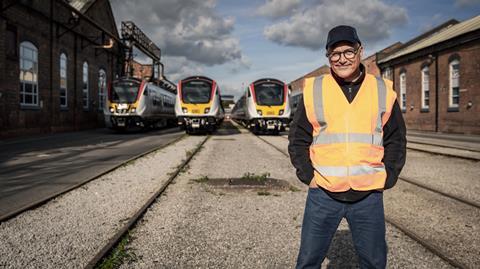 “This new miniseries launches with a fantastic, in every sense, premise: what if a giant sinkhole opened up in Los Angeles, a shedload of people fell through it, and down there was LA 10,000 years ago? And that’s it. That’s your lot for good things about this programme. After that it’s tremendously, gloriously, educationally bad. To say the plot is by-the-numbers is to slander numbers. ”
Lucy Mangan, The Guardian

“You can’t take La Brea seriously. The characters are cutouts, and the primordial predators aren’t remotely frightening because the CGI budget isn’t high enough. It’s not a good show, but perhaps it’s not trying to be – this is popcorn entertainment that will keep you reasonably amused as it barrels along in its own silly way.”
Anita Singh, The Telegraph

Inside the Factory XL: Trains, BBC2

“Wallace’s manic enthusiasm is the hallmark of Inside the Factory (the “XL” refers to this series’s supersized subjects), but here it reached its apex. I worried about his blood pressure. He was beside himself at the scale of the “five-carriage monster” train being put together at the Alstom factory in Derby, even though it seemed a completely normal size. But that’s another thing about this show: it bombards you with figures, like the TV equivalent of a school maths paper.
Anita Singh, The Telegraph

“I don’t wish to be indelicate about Inside the Factory XL, but if that’s the kind of ecstatic facial expression that Gregg Wallace pulls watching a train panel being spray-painted then I dread to think what Mrs Wallace has to behold in the boudoir. “I’m lucky enough to see quite a few factories, but wow!” Wallace gurned, la petite mort made flesh. Yes, Gregg, we remember. There was the teabag factory, the mattress factory, the lavatory roll factory. What is Wallace on? These weren’t just “excited little boy being allowed to play with a real train” vibes; he was practically self-combusting, making “mer-ner” train-horn noises for no reason, while the bemused factory workers looked on, possibly thinking, “How long is this bloke from MasterChef staying?”
Carol Midgley, The Times

“But with train and Tube strikes crippling public transport, this was the worst time for Gregg to be chuntering with joy about the 30 million rail journeys Britons take each week.No one, though, not even Susan, could have been more excited than Gregg”.
Christopher Stevens, Daily Mail

“The pleasure of her shows is the sheer amount she packs in to every episode. Susan’s like a ten-year-old on a school trip who drank a litre of pop on the coach and is liable to explode if she isn’t allowed to run riot till she drops.”
Christopher Stevens, Daily Mail

“Seriously, the best action we got was when the wind whipped a £20 note out of her hand as she tried to buy doughnuts and she had to chase after it. But I like Calman; she has a dry wit and underneath all the exuberance she is quietly sending herself up.”
Carol Midgley, The Times