“This is a programme that aims to avoid preaching, while still engaging the unconverted” 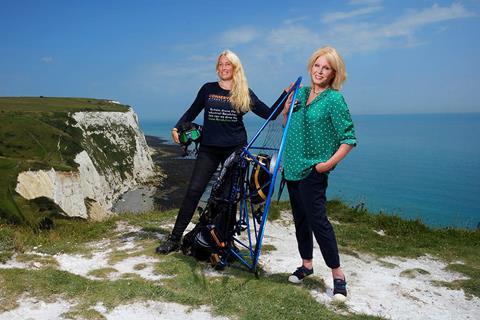 “The level of analysis sometimes feels slightly basic, but this is a programme that aims to avoid preaching, while still engaging the unconverted. Yes, you could argue that the time for individual action diverting us from the path of destruction is long past, but what good does the counsel of despair ever do? Will more politicians be moved to more action by pressure from engaged citizens or from those sitting silently frozen in fear? The programme is bookended by the awful news that Burton and Dench suffered an air collision towards the end of their trip in which Burton was killed and Dench seriously injured. She and Burton’s family wanted the programme to be finished and broadcast. Its wholesome, accessible optimism is – hopefully – exactly what they wanted.”
Lucy Mangan, The Guardian

“Here Lumley and Dench, who earned her nickname flying with endangered swans from Arctic Russia to England, presented the case for optimism. The lovely litter pickers, the eco-warriors and the people trying to ensure that the Scottish wildcat, which looked a lot like my tabby, do not go extinct.”
Carol Midgley, The Times

“What elevated this from being a straightforward inspirational litany of “climate heroes” was the genuine friendship that developed between the two women, illustrated by a lovely scene where they made each other laugh while planting trees in Scotland.”
Gerard Gilbert, The i

“Everybody wants to save the world. But if Ab Fab’s Patsy and her eco-doc proved anything, it is that we’re going about things the wrong way. Unwieldy, underpowered and inefficient, the electric motor that powered flying adventurer Sacha Dench’s paraglider looked worse than useless — a terrible advert for alternative energy sources.”
Christopher Stevens, Daily Mail

“One of the most fascinating aspects of Blair and Brown: The New Labour Revolution has been Gordon Brown’s face, particularly the way in which he now looks more like a jowly old bulldog – or a battle-scarred campaigner. When he speaks, his words surface with an attractively reflective wryness, while Tony Blair seems more on his mettle, the easy charm of his heyday replaced with something more brittle. But the amazing thing, given New Labour’s reputation for spin, is how candid both men have been. That candour slipped somewhat in the final episode as they tried to remember – or conveniently forgot – the details of the September 2006 coup.”
Gerard Gilbert, The i

“This was history delivered with just the right mix of big picture context and insider tittle-tattle. And it was a reminder that, in Blair and Brown, the UK had been governed for more than a decade by two people who didn’t seem to like each other. The real miracle was perhaps that they managed to muddle along as long as they did.”
Ed Power, The Telegraph

“There’s barely any story. Last week someone stole some money and hid it, this week a couple of other people found it. We’re supposed to be drawn into the characters’ lives. But I’d cross the road to avoid most of them.”
Christopher Stevens, Daily Mail

“Even though it has its duff moments, Merchant’s comedy is proving to be sharp and warm, witty and menacing, showing flashes of the splendidly sick humour of The Office.”
Carol Midgley, The Times