“Lycett was an excellent anchor – affable, accessible and with enough quips to keep us interested.” 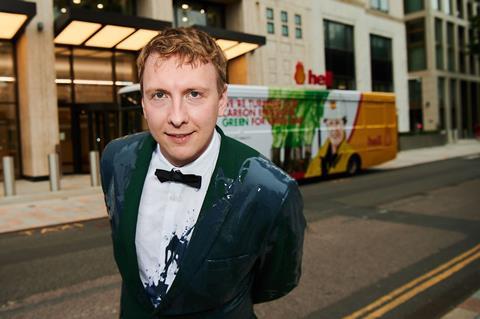 “This was journalistic investigation as vibe, conducted over social media, poking fun at the “naughty little boys and girls at Shell”, but not really telling us anything wildly surprising. If anything it reminded me of being taken on CND marches as a child. The singing, the shared purpose, the sight of people dressed in black skeleton suits pretending to die in a nuclear explosion was diverting and occasionally fun. But at the end of the day, I now wonder, was it just about making the demonstrators feel good?”

“Lycett was an excellent anchor – affable, accessible and with enough quips to keep us interested without stealing the limelight from the issue at hand. It was to his credit that he didn’t try to address all of Shell’s misdemeanours but focussed on greenwashing and how the company may not be telling the full story.”

Rachael Sigee, The i

“It’s hard not to admire him for ruffling corporate feathers. As he vomits excrement one last time, I wonder what Channel 4 executives and the new culture secretary Nadine Dorries must be thinking. Isn’t Channel 4’s business model undermined by programmes taking pots shots at its advertisers? And shouldn’t lefty Lycett’s lentil-weaving, tree-hugging programme make Dorries’ beef with the BBC seem like chicken feed?”

“It was an ad so terrible – deliberately so, but still – that even Lycett looked embarrassed. I won’t tell you what was in it, in case you’re reading this over your breakfast. Suffice to say, it was gross. “I hope my advert has made a difference,” Lycett said at the end, knowing it hadn’t. His heart was in the right place. But the programme was a waste of energy.”

“In rattling through so much, nothing was given the time it deserved. Any of the genres or social and cultural movements mentioned could have easily filled a series on their own but here they were crammed in together and not particularly coherently. The snippet on rap duo Cookie Crew had me itching for more – maybe a UK version of the excellent HBO Canada series, Hip Hop Evolution. Given how much there was to get through, the show also found an awful lot of time for reaction shots of Jones nodding and smiling along to his interviewees.”
Rachael Sigee, The i

“Practically none of the era’s greats featured for longer than a blink. We heard barely four bars of U2, The Smiths or Prince. Kate Bush and George Michael went unmentioned. Springsteen was on screen for as long as it took him to haul Courteney Cox out of the crowd in his Dancing In The Dark video. Instead, we had long, dreary clips from the likes of Bananarama and Bronski Beat, while presenter Dylan Jones droned sententiously about their lasting contribution to musical culture. I bet Dylan wouldn’t have been caught dead listening to Bananarama when he was editor of pretentious fashion mag i-D in the 1980s. His thesis, that modern pop started with the launch of MTV in 1981, was impossible to follow, because he was intent on showing off his knowledge.Like Mark Kermode with his shows about movie genres, Dylan chucked heaps of obscure names at us without stopping to explain their significance.”
Christopher Stevens, Daily Mail

“If episode one of series three was a delight because it was just so good to have these characters and their ferocious interplay back on screen, episode two reminded you that when the kids won’t stop squabbling, occasionally you need a break. What saved Succession from descending to merely very good from its normal transcendence was the detail on show here.”
Benji Wilson, The Telegraph

“It feels almost like a bottle episode: claustrophobic, full of conflict, ultimately leaving its various players in the very place they started.”
Philippa Snow, The Indpendent

“Young Joseph was respectful throughout, and there were no signs of Hollywood luvviedom. But I couldn’t help wishing for less Joe, more Ran. Men of his generation get vanishingly few opportunities on prime-time television these days, and his exploits could fill a series on their own.”
Anita Singh, The Telegraph