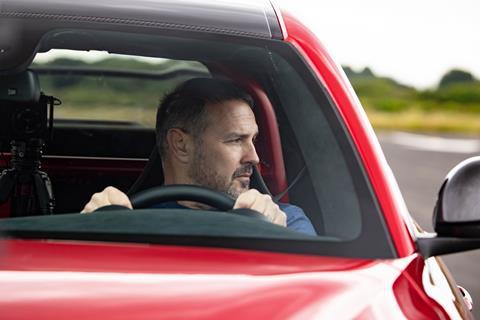 “It remains a space where men can be boys: perving over curves, pulling on their proverbial gear sticks and otherwise sublimating their erotic drives. Perhaps there are women behind the cameras – and, yes, there are a few in the studio audience – but by and large this is the BBC’s answer to the Garrick Club. Top Gear would have been more in tune with prevailing diversity norms had Sue Perkins replaced Jeremy Clarkson as its host, or if Victoria Coren Mitchell had done a reverse takeover of Top Gear with a TV version of Women Talking About Cars. Maybe Katy Balls could have adapted her Women With Balls podcast with a special about gendered motoring practices in Riyadh. But none of those would have done what this, the Great British Jerk Off, manages to do unwittingly – to eloquently psychopathologise the patriarchy…If this segment had come in smell-o-vision, the scent of petrol and sentiment would have been overpowering, but for once Top Gear’s heart is in the right place, hymning a British action hero.”
Stuart Jeffries, The Guardian

“I know a lot of people are unimpressed post-Clarkson Top Gear, and find McGuinness too loud in this returning episode he delivered a wonderful little film. It was a tribute to Eddie Kidd, the motorcycle daredevil and Britain’s answer to Evel Knievel.In a slice of nostalgia for some of us and a primer for others too young to remember… It was a moving piece of television. And as for the rest of the show? It featured all the positives and negatives of this Top Gear incarnation…Flintoff still presents like a man concentrating so hard on remembering his lines that you can almost hear the cogs whirring in his brain, and the scripted banter remains a bit cringeworthy. The supercar section threatened to be a bit dull – the TV equivalent of those posters every 10-year-old boy had on their wall next to a picture of Farrah Fawcett – but livened up when three F1 drivers gamely joined in for a relay race.”
Anita Singh, The Telegraph

“It paid a lavish half-hour tribute, culminating in a remarkably moving display of petrol-fuelled acrobatics…Paddy’s salute had a warmth and generosity that Clarkson and his crew couldn’t match…With his co-stars Freddie Flintoff and Chris Harris, Paddy’s version of this veteran series is far better when they don’t try to emulate the arrogance and sneer of their predecessors.”
Christopher Stevens, Daily Mail

“McGuinness’s lengthy tribute to Kidd, who has been paralysed and suffering from brain damage since 1996 when a jump landing went disastrously wrong, was the most interesting thing I have seen on Top Gear….When Kidd cried and the performers cried and McGuinness cried it was honestly the first time this programme has made me moist of eye. It was an unexpectedly tender thing.”
Carol Midgley, The Times

The Lakes with Simon Reeve, BBC2

“It was a gentle introduction to the idea that the Lake District is more than a pretty holiday destination. This is not in the same territory as Julia Bradbury doing Wainwright’s Walks…he brings the same journalistic intent, rooting out stories that wouldn’t make it into a tourist brochure. The programme strives for balance. Other shows might do a nice item on rewilding and leave it at that…As a presenter, he’s inquiring and empathetic.”
Anita Singh, The Telegraph

“The Lakes with Simon Reeve is what happens when a proper travel journalist explores home ground…Reeve applied his trademark forensic curiosity to uncover the truth behind the tourist destinations. It made for fascinating viewing as he explored the tensions between the land, the people who live on it and the people who visit it…Reeve was keen to highlight that appreciating nature also means confronting it, addressing thorny issues.”
Rachael Sigee, The i

“The resulting programme was a complex picture in which Reeves explored the pros and cons of rewilding…It exploded the romantic myth of locals living idyllic lives, instead revealing rural poverty and a sense of despair”
Carol Midgley, The Times

“Simon’s boyish enthusiasm and naive charm encourage even the most taciturn farmers to open up.”
Christopher Stevens, Daily Mail

“The film was part of Children in Need 2021 and felt constrained by this, primarily focusing on charities supported by the appeal. At one point, a young woman interrupted filming to thank George for his work, before explaining that she is now studying psychology after spending time in a borderline personality disorder clinic. In another documentary, this would have presented a golden opportunity for conversation but here it was merely a fleeting moment before it returned to the script. This was symptomatic of a film which had good intentions and empathetic delivery but was too neatly and conveniently packaged to make the impact it wanted to.”
Rachael Sigee, The i

“The CGI in this series, but the animation here is So Very Bad that it makes everything Whittaker does read like a cheesy parody…It all feels meaningless. We have appearances from Cybermen, Daleks and Weeping Angels – the most feared villains in the Whoniverse – but what’s the point when these scenes exist in alternative timelines that may never crop up again?
Isobel Lewis, The Indpendent

“We had no idea there would also be Daleks and an extra Time Lord or two. It all made for another thrilling treat in a series which is proving a pleasant surprise…The couple’s long-distance romance was a sweetly affecting one, aimed squarely at the Hunger Games/Twilight generations.”
Michael Hogan, The Telegraph