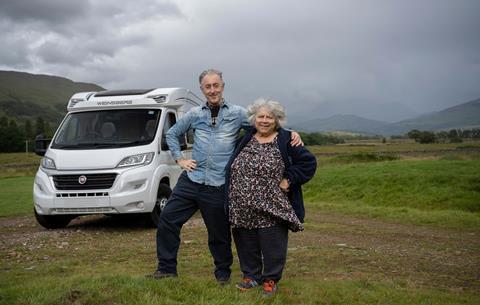 “Margolyes’s shtick is not quite as relentless as it has been up until now in her late television career renaissance. It is nice for it to take something of a back seat here, when it has begun to seem effortful and wearying for purveyor and viewer alike. Still, there is enough left to satisfy those whose appetite for her humour remains unabated…The rest is filler. If you’re in the mood for the gentlest of travelogues, the slightest of narratives and some nice views, you won’t be disappointed. If you are looking for anything else, you’ll probably be strutting and fretting quite a bit before the hour is done.”
Lucy Mangan, The Guardian

“The format was one of those templated staycation travelogues that became all the rage during lockdown. The pair tried their hand at wholesome local activities and gave bite-sized history lessons en route. So far, so generic. What lifted it out of the ordinary was the huge charm and fizzing chemistry of our hosts…The pair are palpably fond of one another, with an easy rapport which effortlessly switched gears between humorous and heartfelt. Margolyes was generous-spirited and supportive, becoming touchingly tearful when she heard about Cummings’ childhood in Carnoustie, where his bullying father had been physically abusive. His painful memories provided an unexpected jolt of poignancy amid the jollity. In return, he was a total gentleman to his travelling companion.”
Michael Hogan, The Telegraph

“The premise is promising enough. As the programme notes say, “Hollywood actors Miriam Margolyes and Alan Cumming roll back the decades and return to their Scottish roots. Part rediscovery, part revelation and always a total riot.” Quite so, but I didn’t expect Margolyes to be treated quite as much as, well, the butt of so much of the humour. It seems no way to treat a minor national treasure… they have their moments, our travellers, but, even so, Miriam and Alan: Lost in Scotland does really seem like a pairing slightly the wrong side of random, like two slightly asymmetric cheeks of the same arse, as I believe they say in Scotland.”
Sean O’Grady, The Independent

“The emphasis so heavily on their private connection to Scotland the first episode was slightly lacking in stunning vistas, the Glasgow skyline, or any real local colour. This was agreeable comfort viewing, but in Lost in Scotland, the Scotland part of the equation became slightly lost.”
Ed Power,  The i

“How the two flamboyant thesps know each other was not made clear, though they did the Graham Norton Show together last year. They cooed over each other like a wicked auntie and her favourite nephew, but that might have been an act. Maybe Channel 4 bosses simply had a spare camper van and fancied making a travelogue with a national treasure and a Hollywood star exploring their Scottish roots. David Tennant and Maggie Smith weren’t available, so this was the next best thing.”
Christopher Stevens, Daily Mail

“The new five-episode series, Tiger King 2, is a mess. Directionless and confused…In making a sequel, Goode and Chaiklin have hit a major roadblock – they’re covering old ground. The original was such a success that the tale of Joe Exotic, his incarceration, his legal battle and the fate of his park was splashed across the news and social media in real-time. Only those who are still obsessed with Exotic will enjoy this second series, though there’s not much new here for them to learn. The show spends an inordinate amount of time investigating the claim that Baskin – who doesn’t appear and attempted to sue Netflix for the use of her image…Like much of the show, it’s exploitative and difficult to watch… Tacked on to the very end is a message that exotic animals belong in the wild and a call to protect their natural habitat. It’s a decision to be commended, though feels a little like lip service given how much the cats were ignored in the show’s first outing.”
Emily Baker, The i

“If he is hoping that Tiger King 2 will bring people closer to the truth, he is sorely mistaken. It is an unholy Jenga tower of claim, counterclaim, baseless accusations, changed stories and outright lies. The final episode features what should be a shocking “reveal” by one protagonist, but you are so weary by the time you get there, you wouldn’t trust them if they told you the sky was blue…There are brief, interesting brushes with Exotic’s colourful, distressing past…It’s a mess. With an Exotic vacuum to fill, the film-makers have dug up a whole new conveyor belt of grifters, all happy to spout nonsense in exchange for some screen time…Last March, in lockdown, with seven episodes of lurid, high-octane documentary trash to guzzle down, we were all tiger drunk. Tiger King 2 won’t just sober you up, it will make you wish you’d never touched a drop.”
Chris Bennion, The Telegraph

”It’s great to know that the Beeb’s fundraising efforts help pay for such good work. But the best editions of DIY SOS have us choked up from the first minute, with family stories of tragedy and courage. That was missing here.”
Christopher Stevens, Daily Mail

“It was impossible not to feel your faith in human nature slightly restored. Gilbert’s comedy persona is a sort of energetic grumpiness, but he too was soon revealed to be a softie. As the playground took shape, he struggled to keep it together… With so much bad news in the world, the sight of dozens of volunteers donning hard hats and hi-vis jackets gladdened the heart.”
Ed Power, The i