Travels in Trumpland with Ed Balls; My Family And The Galapagos; Poldark; WOS Wrestling 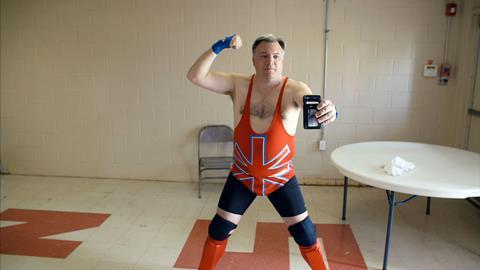 “The interesting thing about this is that Balls isn’t simply saying: “Look at these crazy redneck idiots. How the hell did it come to this?” He is not starting from the assumption that they are wrong. He is taking the time to hang out with them, to listen and get inside their world, to see things through their eyes in order to understand how it came to this. Hey, if “crooked Hillary” had been able to adopt even a little of the same empathy, it might never have come to this.”
Sam Wollaston, The Guardian

“Balls is a likeable, matey TV presence. His politician’s ability to put people at ease and get them talking transfers well to the small screen. But like most politicians, too, he was a mite too easily pleased by his own argument. And he was a touch too keen to agree, to people-please instead of challenging.”
Gerard O’Donovan, Daily Telegraph

“Balls has shown he is game for self-parody on Strictly Come Dancing and did so again here, but there was a depth and political analysis to this documentary that showed he is actually good at this TV lark. He’s a natural and seems more at ease with people than, say, Michael Portillo. Talking to people, he has a laid-back, humorous manner, but also the knowledge to ask searching questions.”
Carol Midgley, The Times

“If you’re going to turn Strictly stars into investigative journalists, you might as well send Len Goodman. At least he’s good at talking to people.”
Christopher Stevens, Daily Mail

My Family And The Galapagos, Channel 4

“The show’s only drawback is that there’s too much to discover in just three episodes. I could happily have spent an hour learning how the human residents of Santa Cruz cope, when one giant tortoise on Main Street can cause gridlock. Charles Darwin never predicted that.”
Christopher Stevens, Daily Mail

“I’m sure Monty wanted to bring his family with him as he fights to preserve the Galapagos and I’m sure they wanted to come. At the same time, showing us the place through the eyes of Monty’s two, wonderstruck little girls was something of a masterstroke. You couldn’t help but share their delight at the sea lions dozing on benches in the town square and the centuries-old tortoises plodding through the bushes.”
Matt Baylis, Daily Express

“Undeniably, this consummate costume drama at times this series felt like it was already running out of steam. But when it’s been on form, as here, there’s still nothing like it for heart-stoppingly, breathtakingly big drama.”
Gerard O’Donovan, Daily Telegraph

“It was the turn of the century in Poldark, so naturally they partied like it was 1799. Just kidding! The finale was less “open a bottle”, more “open a vein”. You were blubbing, weren’t you? Of course you were.”
Carol Midgley, The Times

“Attempting to resurrect this family friendly tradition was a worthy endeavour and there was lots to like. This was self-styled sports entertainment - a camp pantomime, all fake tan and cartoonish theatrics, more akin to game show Gladiators than serious sport.”
Michael Hogan, Daily Telegraph