In-air collision avoidance systems and lighter batteries could enable unmanned aerial vehicles to be used in a host of new ways. 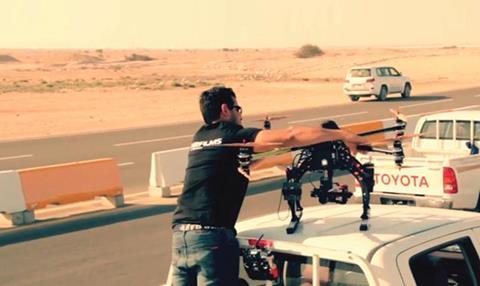 Lighter airframes, heavier payloads and longer flight times are on the wishlists of those who film using Unmanned Aerial Vehicles (UAVs). But the innovations concentrating minds more than these incremental advances are collision avoidance and object tracking systems.

To some, there is a clear need for a greater level of protection to avoid in-air accidents as the UK’s skies fill with drone aviation hobbyists. To others, the automated in-flight detection and avoidance systems in development across the industry will increase the likelihood of an injurious, even fatal, disaster.

This is a serious issue, blamed in part on a lax regulatory system that has not kept pace with skyrocketing UAV use, propelled by the plummeting cost of components and the ease of buying remote-controlled aircraft online.

“The way licences are issued, there is no requirement to have any technical knowledge of how drones operate,” says Jamie Stevens, owner of Helicam Media and drone pilot with a Civil Aviation Authority (CAA)-approved qualification. “There is no requirement to fly them manually without the aid of GPS. If something were to go wrong and the GPS was lost, would they be able to fly it properly?”

The current standard permission from the CAA allows the UAV to be no closer than 50 metres away from any structure or person that ‘isn’t under your control’. Some UAV film companies can achieve special exemptions in congested areas, based around specific planning and safety redundancies.

Where UAV pros tend to design and build their flying machines from scratch, many enthusiasts and commercial start-ups use off-the-shelf drones.

“It’s like taking a weapon out of a box and hoping it will operate,” says Stevens. “When I am flying something over people’s heads, I want to know exactly how it was put together, not just hope it is assembled right.”

He floats the idea that drones be fitted with registration barcodes so that groundbased police or air-traffic officials could scan and check them using lasers.

Auto-follow systems
Several companies are developing autofollow tracking systems. The $1m Kickstarter- funded Hexo+ claims to require no pilot or cameraman and is controlled via a 3D model of the camera’s point of view on a smartphone app. There is no avoidance system included in the first version, although Hexo+ says it is working on it.

“The more automated a protection system is, the more it can go wrong,” says Toby Pocock, managing director of aerial filming company Skyvantage and CAA-licenced drone pilot. “Our licence, or ‘permission for aerial work’, is based on a human operator. Trust me, when you put all your faith into an automated system, it will almost certainly let you down.”

Other auto-follow systems include AirDog from Helico Aerospace Industries. A $500,000 (£325,000) Kickstarter project, it is controlled by a wrist-worn wireless module at a range up to 1,000 feet.

UAV filming firm Batcam’s five-year business plan incorporates various assumptions about how the UAV market and regulation will progress. “If, for example, collision avoidance is brought to a level where it is trustworthy, then we would expect to see an easing on distances to the public,” says co-founder Jon Hurndall. “Imagine using an overhead UAV at a football match.

Even flying low to the pitch, the UAV could be nimble enough to dodge a ball being kicked towards it. It’s an exciting prospect and will bring a new dimension to sports broadcasting.”

Most R&D is going into making lighter systems. Airframes are already made of carbon fibre so greater gains can be made by reducing the weight of batteries – which will increase flight times.

CAA rules restrict operation of drones above 7kg ‘without permission’ over central London. “Staying under that magic 7kg weight helps speed up planning for jobs and reduces your acceptable distance from the public,” says Hurndall.

Similarly, the weight and size of onboard recorders limits flight time. “You want something that is light enough not to affect flight times significantly and small enough to mount directly onto the gimbal,” says Hurndall. “We either record internally in the camera, or use the Atomos Shogun, which is particularly great with the Panasonic GH4 as you get a 4K 10bit output.”

Live OBs
It is only a matter of time before UAVs are as much a fixture of OBs as wire-hung spider- cams. In the US, Fox Sports has tested drones at several events, including an Indianapolis Supercross event in March, where riders were filmed in an empty stadium.

A team from US firm Heli- Video Productions operated three drones simultaneously that tracked five motorcycles. Fox Sports director of technical operations Brad Cheney told the broadcaster’s website: “The control of movement of these devices was faster and more agile than we expected in such a dynamic environment as supercross.”

In Qatar, UAVs have been used for years to fi lm camel races. Dutch UAV specialist Airfilms flies drones above the track, sending HD signals by RF to a car driving alongside, and from there back to an OB van.

The gimbal is arguably the most essential piece of drone filming kit, stabilising the camera against the movement of the UAV. “Without these, it is simply not possible to acquire super-stable video,” says Pocock. “Vibrations and unwanted movement in the camera will seriously affect the shot.”

Early models were servo operated, which, according to Dean Wynton, director and UAV pilot at aerial filming firm Aerosight, meant “a lag in the response time, and they were not as smooth as brushless motors”.

Newer gimbals are packed with accelerometers and gyroscopes, making “a massive difference to stability” says Wynton.

The Z15 Zenmuse, for example, is claimed by manufacturer DJI to achieve sub-pixel stabilisation. It costs £2,000 – a hefty price tag in the drone market but nothing compared with the cost of a full-scale helicopter gimbal: north of £200,000.

While AirDog, Hexo+ and others from UAV brand Parrot are aimed at the consumer and action sports market, their designs for autonomous one-person control are affecting professional development.

Bradley Engineering managing director David Bradley says the firm is “not actively marketing” its Gekko remote control gimbal because the industry is dominated by lower-spec technology.

“Auto technology is great for certain applications but the first thing any cinematographer would do is switch all the automatic functions off because they want to get a unique shot with a unique look,” he says.

Inexpensive pocket cameras like the GoPro Hero are the go-to option for aerial photography but rival camera manufacturers have wised up to the demand. Arri became the first cinema-class camera manufacturer to adapt its models for UAV use with the Alexa Mini, a version of the Alexa with a 35mm sensor in a compact carbon-fibre housing. “

Arri is the first camera manufacturer to take the UAV market seriously,” says Hurndall. “Size, weight and video quality are obviously trade-offs, but critical elements for any manufacturer to consider.”