“This isn’t a complete failure, but it’s crude and blunt instead of polished and sharp.” 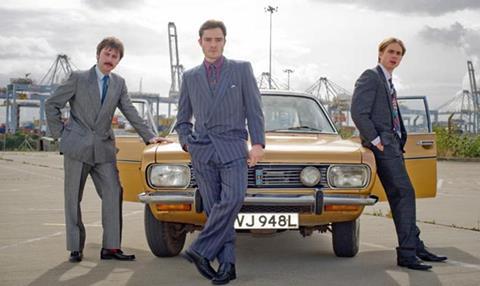 “Positives include a rapid-fire script and a visual style indebted to the Lock, Stock and Two Smoking Barrels school of fast-edits and freeze-frames. Alas, the slickness cannot paper over threadbare gags and the fact that every character feels like a caricature of a caricature.”
Ed Power, The Telegraph

“Unfortunately, Damon Beesley’s White Gold is more nasty than funny. Some of the charm that seduces customers needs to work on us viewers too.”
Andrew Billen, The Times

“This territory was covered far more cleverly during the Thatcher years by Harry Enfield, and David Jason, of course, in Only Fools And Horses. This isn’t a complete failure, but it’s crude and blunt instead of polished and sharp.”
Christopher Stevens, Daily Mail

“This is essentially one gag turned into far too many minutes of licence-payers’ time. I can’t even really tell you what that gag is, except that it involves how horrid and garish the Eighties were and how funny they now seem (allegedly) in the rear-view mirror.”
Matt Baylis, Daily Express

“The plot is fairly tenuous, but Ed Westwick’s asides to camera explaining a salesman’s tricks of the trade provided enough comedy to keep me watching.”
Chloe Hamilton, The i

“Set in the 80s, there’s something of Ashes to Ashes about its nostalgia, nice cars and tunes. Westwick’s asides to camera might get tiresome. Otherwise, yeah, it’s funny.”
Sam Wollaston, The Guardian

“There are a few comedy moments. But on the whole the Met cops come out of this pretty well. From the trailers, it looks as if there will be more from the other side in future episodes, from people who see them as the enemy. For balance. Already compulsive viewing, though.”
Sam Wollaston, The Guardian

“We must assume that if there is a Braquo-style outpost of violent rogue cops somewhere in Greater London, Shona Thompson’s team missed it. As it is, the Met emerges as one of the most PC outfits in the country.”
Andrew Billen, The Times

“This documentary failed to distinguish between the courageous and thankless work of the coppers on the frontline and the careerist politicians at the uppermost levels. As far as the producers were concerned, they were all marvellous. It’s a pity they couldn’t persuade some of the PCs to speak off the record about their frustrations, because then viewers might have heard a very different story.”
Christopher Stevens, Daily Mail

“Was it only for the cameras that an officer said she sympathised with a homeless person while she was moving him on? Are they really that polite when the cameras are not there? Among the knife crimes and the sex trafficking, there was still room for more of those odd moments that pop up in any serious institution.”
Matt Baylis, Daily Express

“The episode made me appreciate, if I didn’t before, the exceptional work done by our police service, in the most trying, dangerous circumstances. For every terrifying moment there were heart-warming ones.”
Chloe Hamilton, The i