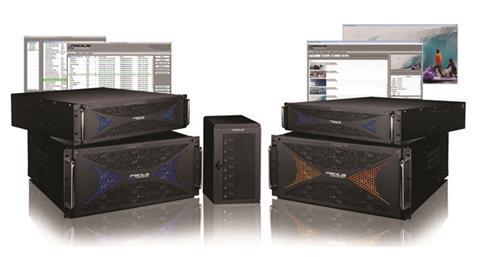 TerraBlock is a virtual volume system, allowing facility administrators to create unique volume configurations that make the best use of the capacity and scalability of HDDs, and the consistency of speed and bandwidth inherent in SSDs.

The 8D includes gigabit ethernet connectivity and can be upgraded to support fibre channel and 10GigE connections, which the company claimed made it very attractive for facilities looking for a cost effective way to use existing fibre channel networking. Pricing revealed at NAB suggested that the TerraBlock 8D would sell for less than $10,000 (around £7,000).

The Facilis FastTracker is a comprehensive application for cataloging, searching and viewing many media types within the TerraBlock shared storage system, including all major QuickTime, MP4 and MXF codecs, along with DPX and TARGA image sequences.

The system includes custom metadata tagging, catalogue user permissions, Boolean search capability and incremental indexing functionality. With no browser-based dependencies, Facilis claimed its application was the fastest way to find clips, view them, and bring them into a project.

Marketing VP at Facilis James McKenna said, “Our customers have been asking for a system capable of concurrent editorial and finishing workflows, an easy way to track the terabytes of media they use, and an entry-level system for deploying in smaller workgroups. Our new products are direct responses to these requests, and will help our customers be prepared for the changing landscape of post-production.”

Also on show at NAB is TerraBlock software Version 6.5, which includes new scalability features for volumes and workgroups. Facilis said interoperability with third party applications has been further improved along with performance enhancements for resolution independent workflows