“Foyle purists may have been a bit alarmed when the opening sequence proved so action-packed”. Read on for the verdict on last night’s TV. 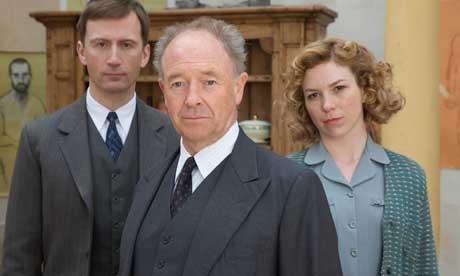 “Foyle purists may have been a bit alarmed when the opening sequence proved so action-packed – what with gunfire on the streets of middle England, an escape by Russian PoWs, several chases and a suicide.”
James Walton, The Daily Telegraph

“Foyle’s War began its latest series with some nice in-jokes about Foyle’s indispensability. ‘It was very good of you to return,’ Foyle is told by his superiors.”
Tom Sutcliffe, The Independent

“I fear Kay Mellor has turned this no doubt lovingly meant if disguised biography of her mother into a potboiler.”
Andrew Billen, The Times

“It’s true that this might well be how a love affair feels, as if the world has emptied, leaving only two people in it. But it isn’t quite the truth of how an infidelity is to be conducted, when a shy young woman would be likely to feel that there are eyes everywhere.”
Tom Sutcliffe, The Independent

“It never felt like very much was at stake for this young mother tempted by the sins of the flesh.”
Matt Baylis, Daily Express

“Smith is a wonderful mercurial new Doctor, who dismissed the death of his people as ‘a bad day’, thus sparing us his predecessor’s soliloquies on the subject.”Andrew Billen, The Times

“The people are saved, the children are saved, the star whale is saved, it’s all back on with the Doctor. Thank God for that.”
Sam Wollaston, The Guardian

“For the average viewer it was a bit like finding out the Great Fire of London started in a cake shop instead of a pie shop – a little insignificant against the broader background.”
Matt Baylis, Daily Express