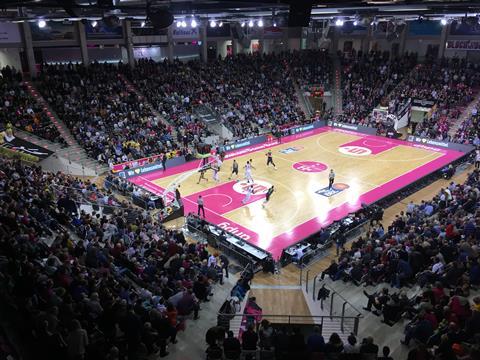 The production team on a high-profile basketball game in the German Bundesliga on Sunday (pictured above) has created what it says is the world’s first 6K tiled 360-degree live sports stream.

What this boils down to is a way of getting much higher quality, much higher resolution 360-degree images to the home viewer without requiring them to have a very high bandwidth broadband connection.

It aims to eliminate the poor quality, nausea-inducing nature of previous attempts at live streaming 360-degree content, with a four-fold increase in quality while at the same time reducing bitrates by up to 75%.

“Through the rapid evolution of 360-degree technology, we have the potential to push boundaries and take the consumer to the heart of the game itself.”

Instead of trying to stream the entire 6K image, the 6K picture that makes up the 360-degree view is broken up into a series of much smaller tiles, each of which is just 500x500 pixels.

Only the tiles you’re viewing at the time are streamed, while the rest of the background, which is not part of the image you’re looking at, is streamed at a much lower resolution.

When you move around the 330-degree image – either with a VR headset or by swiping the image on a tablet – the low-res version of the tiles you’re now looking at are replaced with high-quality versions of those tiles at “lightning speed” (typically within 30-60 milliseconds).

The game was streamed to Deutsche Telekom’s Magenta VR app, with a choice of 360-degree views from two different 6K immersive cameras. One was positioned behind one of the baskets and the other showed the view from the manager/player bench at the side of the court.

MediaKind led the technical project management, which utilised its virtualised, cloud-based software encoding and delivery to Deutsche Telekom consumers over the Magenta VR app. The 6K tiled 360-degree live stream from the basketball game came after an 18-month collaboration between MediaKind and Tiledmedia.

MediaKind CEO Angel Ruiz, said: “Through the rapid evolution of 360-degree technology, we have the potential to push boundaries and take the consumer to the heart of the game itself. The success of this world first live sport event using 6K 360-degree video is a major milestone for our team of engineers and our partners.” 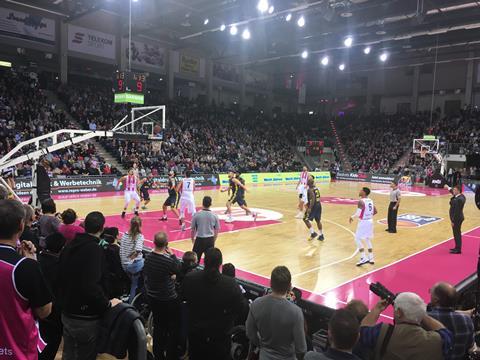