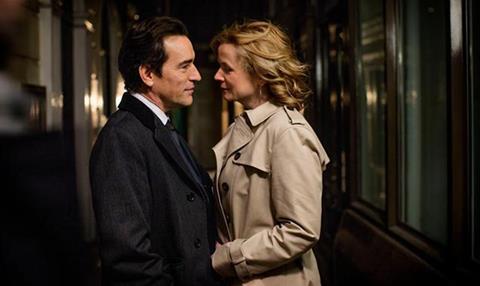 “Occasionally it was a little too slow-burning – but the final twist was just as dark and intense as the opener. The sex scenes may have generated the publicity, but Apple Tree Yard is adult drama in the best sense – subtle, unsettling and richly rewarding.”
Jeff Robson, The i

“The new Sunday night drama Apple Tree Yard is carefully written, imaginatively directed and very well acted. Already I wish it had not been made. Its first episode displayed, I thought, a vengeful hatred of female sexuality.”
Andrew Billen, The Times

“The drama isn’t flawless. What makes it compelling is Emily Watson, who has a rare talent for wearing her thoughts, fears and joys on her face. This steamy, sleazy tale of collapsing middle-class certainties is horribly moreish.”
Jasper Rees, The Telegraph

“We know from the beginning that it’s all going to end very badly for Yvonne and regardless of the pretentious voiceover and the faint whiff of Fifty Shades, watching it all happen is very addictive. This is ugly, sleazy, passionate and dangerous – and why shouldn’t it be?”
Matt Baylis, Daily Express

“I became a little impatient with all the passion, and Yvonne’s musings. I wanted to know how it led to the back of a police van and to court. Hurry along and get on with the thriller, in other words.”
Sam Wollaston, The Guardian

“The producers have made a catastrophic miscalculation. They knew this series would launch as a new U.S. leader was taking office and they bet the pot that it would be Hillary Clinton. Ooops!”
Christopher Stevens, Daily Mail

“There is an incoming Potus, Homeland once again showing its propensity to be on the pulse and interweave with reality. But the president-elect is also a she, Elizabeth Keane. Well, if there can’t be one in real life…”
Sam Wollaston, The Guardian

“We may be back home in New York, and in the run-up to the inauguration of a dangerous new president — but she is a left-wing woman whose underestimation of the terrorist threat is deepened by the death of her soldier son in Iraq. America is going to hell, in other words, but a different kind of hell.”
Andrew Billen, The Times

“For my money, there’s a Damian Lewis-shaped hole at the centre but to remain one of the classiest, most addictive US imports six seasons in is no mean achievement.”
Jeff Robson, The i

“The central story showed that Call the Midwife has not lost its zeal for portraying the grimy hardships of East End life nor the sludgy realities of childbirth. This was grim stuff, only slightly soft-soaped by a happy sort of ending.”
Jasper Rees, The Telegraph

“This was seriously gritty in its depictions of domestic violence and hard-heartedness. Lucy Speed did a splendid turn as Trudy’s mum Zelda – brassy blonde, tough as a dray horse and thankfully, like dray horses, a dying breed.”
Matt Baylis, Daily Express

“If writer Heidi Thomas had tried to take the characters back to London and carried on as if nothing had happened, Call The Midwife would have felt stale. Instead, everything is different and the most thoughtful and spiritually rich drama on television can start afresh.”
Christopher Stevens, Daily Mail