When Nina met Meryl – and Tom and George and Britney

So came the ‘friendly’ warning from Britney Spears’ PR person. She’d just made a film and I’d been granted an interview. In the event she was keener to talk about the then-single Prince William. “Who wouldn’t want to be a princess?” she cooed. 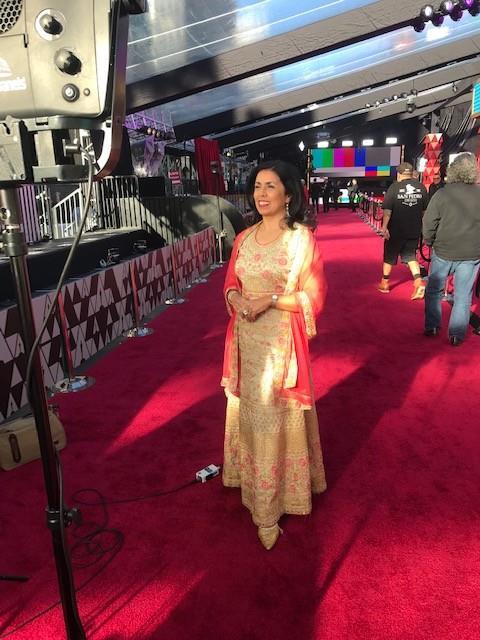 The celebrity PR. Their job is to protect the talent at all costs and the really good ones are astonishingly effective. Take Meryl Street’s team. Shortly before she was due in our interview room, her representative here on earth came in and having checked the cameras angles and lighting, politely asked the camera man to change a shot he’d spent 40 minutes perfecting.

At least it was an interview inside a cosy room. All too often chats with the stars of stage and screen are conducted on red carpets, a location I increasingly view as a hostile environment – not the place for me now if I can help it.

You need stamina, sharp elbows and a readiness for undignified behaviour – all the things I used to have when I started at ITN two decades ago and was ready to do what was needed to get that precious 20 seconds with Tom Cruise in Leicester Square, so I could get a piece out on News at Ten.

It’s a poor substitute for a sit down one-on-one in a hotel suite with no need to scream like a banshee to attract the A-lister’s attention.

There are sometimes hundreds of us media people crammed into pens lining those aforementioned red carpets. Camera stands are placed territorially on your allotted spot, menacing glares directed at latecomers who might sneak their own cameras into the tiny space your camera operator has left for you to squeeze into so that you can shove your microphone at Bradley Cooper and hope he stops to chat.

Sometimes there are so many cast members at a premiere that they arrive en masse and are quickly delivered to each reporter on the line whether you want them or not. The Lord of the Rings premieres were just that – an endless stream of orcs, goblins and elves – and it ended up a confused mess where I got my Middle Earth inhabitants in a muddle.

Then the volume of the crowd and the film music blasting out makes it even more difficult.

Such is the competition on red carpets that you have to figure out ways the star interviewee will notice you and come over, rather than head on over to the assembled photographers straight away. 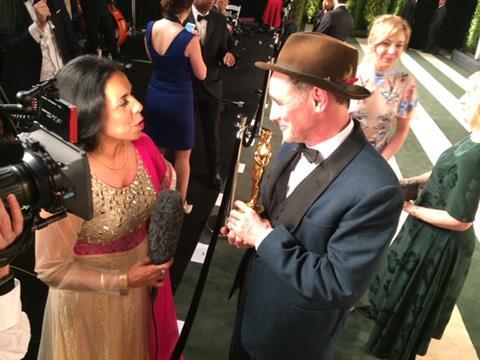 For the Lord of the Rings premiere, wearing my green Kiwi stone necklace, given to me by my Kiwi husband, was a good starting point in my chats with director Peter Jackson, though the ploy had no impact at all by the third film in the series.

When Olivia Colman arrived triumphant at the post-Oscars Vanity Fair party in LA – and the press pack knew by then she never stops to talk to us – I had a trick up my sleeve to get her to turn my way.

As she hurtled by trying to pretend the noisy masses of TV crews were not there, I yelled, “Olivia, I’m from Norwich”. (Sort of true: I live there now but I’m not from there as such.)

She is though, and it worked. She swung around. “Oh my god, Norwich,” she mouthed as she beamed at me.

And then continued on her way. 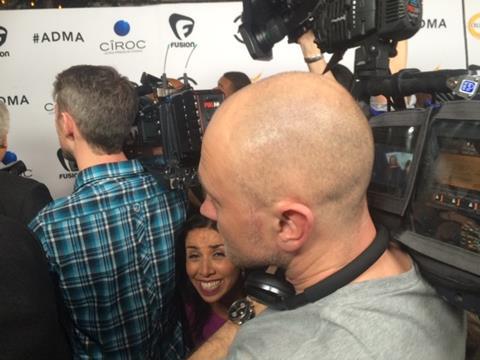 But the mechanics of covering the Vanity Fair event, the party that all the winners go to, is long-winded and difficult. Such is the competition for a spot on that hallowed floor, that those who are granted a place are expected to get there around four hours before the awards start, and then wait. And wait.

I watch the show sitting on the carpet in front of a TV screen wheeled out for us, while eating a burger with my fellow bejewelled reporters. The winners only arrive after the Governor’s Ball and perhaps some private film company dos, so it can be after midnight when the British winner you know you need to get for your coverage makes an appearance.

Helen Mirren, who won an Oscar for The Queen, was the latest, arriving just as we were packing our kit away, but at least she made a bee-line for the British contingent of journalists.

Colin Firth, a winner for The King’s Speech, looked like he’d been celebrating in earnest. As he appeared on the red carpet, his PR team desperately trying to drag him back into the party, he spotted me (I’d interviewed him earlier) and ambled over to have several microphones thrust at him. He happily obliged with some golden sound bites.

I am invariably positioned next to my BBC colleagues on the Vanity Fair press line, with Sky and Good Morning Britain nearby too. You can often hear us asking each other questions – “Who’s that?” or, “What was he in?” – as US stars arrive to competitive jostling by our American colleagues. We are crammed in close to each other that a gentle, considered interview is almost impossible amidst the noise.

The time difference means the Vanity Fair party happens as British breakfast shows go on air here in the UK, and last year I had a number of people complain to me that they were unable to hear the BBC Breakfast reporter’s interview, due to my loud voice conducting an interview at the same time.

I am partially deaf, with constant screeching tinnitus, so my volume is always turned up to 11. Standing next to me on a red carpet can be unfortunate.

“As I wondered around Hollywood Boulevard on the day of the event, I was actually the one being stopped for an interview. By the end I was tempted to give it a go”

Sometimes when you’re waiting for the winners, there are some unexpected guests. In a lull in proceedings a few years back, I spotted Sir Alex Ferguson arriving at the Vanity Fair do. Furious checking of notes all round; was he perhaps a producer of an Oscar winning film that we didn’t know about? Hang on, he hasn’t been in a film, has he? “Nope, I’m just here with a mate; I don’t know that much about movies,” he tells me.

In the year that Slumdog Millionaire picked up the major awards, I was constantly being mistaken for a member of the cast. I always wear Indian outfits to the awards – I’m an Indian woman, invariably the only one in the media line, and my posh outfits are all Indian suits and dresses, so I just pick another one out of my wardrobe every year.

But that year as I wondered around Hollywood Boulevard on the day of the event, I was the one being stopped for an interview. By the end I was tempted to give it a go.

Happily, these days my interviews are almost always conducted indoors. Getting an A-lister to agree to a news interview is the challenge, so when you have jumped all the hurdles, you need to make it worthwhile.

When I had superstars Tom Hanks and Meryl Streep sitting in front of me in a hotel in London, I knew it probably wouldn’t happen again, so I went for it and asked them if they each knew what the other had earned for the same movie they’d just made. Awkward pause. They looked at each other. I’m sure I heard a PR person gasp in the corridor and then they said they didn’t know and they probably should. I’m sure they chatted later. I hope for Tom Hank’s sake he didn’t earn more than Meryl.

A bit of cheeky

A bit of cheek goes a long way. I had landed a rare interview with Mick Jagger, as an exhibition of old Rolling Stones photographs was being launched. Instructions beforehand from his team: it’s just a sit-down interview and he won’t walk around the exhibition with you, which would be the dream, of course. 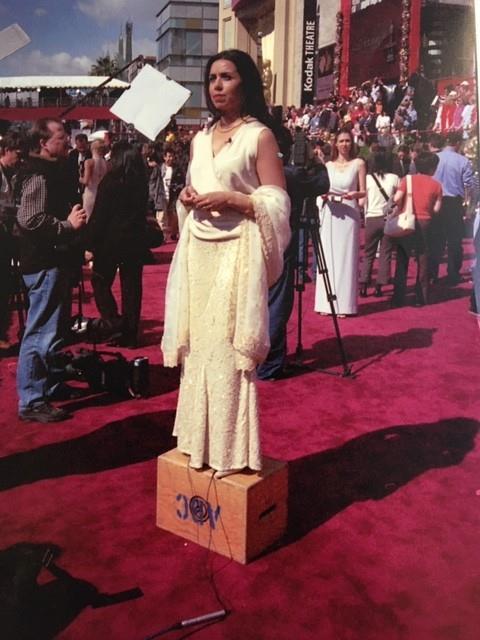 Jagger is utterly charming, funny, gallant and polite. Behind him on the wall was a gorgeous early photograph of the Stones playing when they were starting out. As my interview was timed out, I went for it. “I just want to ask, what is going on in that picture”, I said quickly. He turned his head, I jumped up and moved to the picture and he was too much of a gentleman not to do the same. Camera was still rolling. I had my clip. He was happy so the PR was too. Phew.

I have interviewed thousands of people in my time at ITN and only embarrassed myself on a few occasions – most notably, when I interviewed George Clooney. My interview with him two decades ago when I was at the BBC had brought me to the attention of ITN.

Years later as ITN’s arts correspondent, I had another interview with him. He is an expert at disarming his interviewees, locking his eyes with yours and being utterly attentive. He got up and made me a cup of tea, and then sat down for the interview. I left the room feeling like I’d got a great, incisive, all-encompassing interview until the waiting press journalists asked me what is wrong with his leg.

Sorry? “It’s all bandaged up and he’s limping,” they reply. I’m afraid I was so mesmerised I hadn’t even noticed.