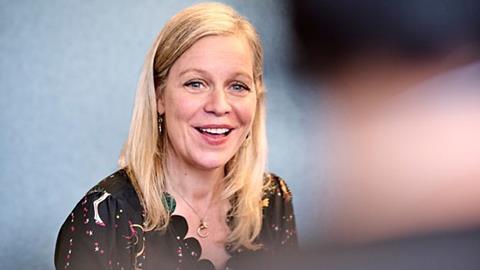 “Thank you so much for coming tonight - and thank you to all the producers and to everyone here in front and behind the camera for all the extraordinary work you’re doing for us.

“Tonight’s a great opportunity for us to say thank you and to share our vision for the BBC’s future and invite you all to be part of it.

“It’s not news to say the world around us is changing rapidly. There’s more choice and more platforms for audiences to find programmes - and more streamers and broadcasters for creatives to make programmes for.

“We are living in a golden age of creativity - full of opportunity and possibility for everyone in this room.

“So it’s more important than ever for us at the BBC to define what makes us special; to demonstrate our unique place in this crowded but exhilarating landscape; to tell all of you what makes us different; and to explain what we can do for you.

“Audience behaviour is changing fast. So I want to make sure we do too.

“I want us to meet, even exceed, their expectations. I think we’ve done that together these last few years, but now’s our chance to more.

“The BBC is part of our lives and close to all our hearts. Our memories have been defined by the TV we grew up with. The BBC helped us all explore the world, it helped define who we are and what we wanted to be.

“The BBC certainly defined what I do now. And I want the BBC to continue to be an inspiration for new generations of storytellers and audiences.

“I want our programmes to educate, entertain and inform, to help shape the lives and views of those growing up in Britain today.

“To inspire and resonate, we not only have to make brilliant programmes, we also have to bring them to our audience in the most dynamic and thoughtful way.

“Because I passionately believe audiences need us more than ever.

“So that is why we are working towards a new vision, a new future for BBC television.

“It’s going to change the way we commission and change our offer to audiences. And it’s going to mean more creative freedom and new opportunities for you.

“A few weeks ago, a critical decision was made in the corridors of Ofcom - to give permission for all new programmes to be available on BBC iPlayer for a minimum of 12 months. Now if you have kids like I do, that might seem obvious - they expect every episode of Friends on tap - or every season of Miranda, Fleabag and Gavin and Stacey.

“But for BBC television, it’s a game changing moment. It means that for the first time we’re going to put iPlayer at the heart of everything we do.

“iPlayer will be the gateway to all our programmes - a ‘Total TV’ experience which will bring everything you want from BBC television into one place. It will be where you watch our channels live or where you choose from all the films, drama, comedy, entertainment or factual on demand.

“So much more than a catch up service, iPlayer will become the best place to watch all BBC TV - bringing you live music, the latest news, the big sporting events and all the shows that feel utterly relevant to Britain on any given day, alongside a rich library of boxsets and films. It will mean a unique mix of live and on demand - a richer choice for audiences than they’ve ever had before.

“We’ll transform the way iPlayer looks and feels - and how audiences use it. We’ll develop a more personalised service to help you navigate through all the possibilities.

“We’ll drop more of our series as boxsets on day one, to let audiences decide how they want to watch.

“iPlayer will be at the heart of our public service mission - to help people find clarity, pleasure, information and inspiration amongst all the noise.

“There is something else that makes our vision for iPlayer unique and special. In fact it’s the vital thing. iPlayer is curated… it’s a cutting edge tech platform - but it’s run by humans. Not assembled by algorithm - but carefully curated by people you can actually see and talk to in this room. People who back your ambition and champion your art.

“This is the thing I think excites me most about what we’re doing. Because in a world of so much content and so much choice, a dynamic curated offering will become more and more important to people.

“So what does this mean for you?

“We are transforming our offer to audiences. And this will mean a big change in the way we commission shows.

“When I was a filmmaker, I remember what it was like to spend two years sweating blood on a documentary series. Then it would go out and you’d check the overnights. And that would be it. You’d cut a few reviews out of the papers and that was all you’d have left.

“Our channels are our greatest advantage. In a global video on demand (VoD) landscape, they are what set the BBC apart, the envy of the streaming world.

“The channels are strong British brands with really clear distinctive visions that British audiences know and love. They reach millions every week. They will be critical to our success.

“This summer offered a taste of things to come - we brought in audiences in their millions for the Women’s World Cup, for Wimbledon, for all our live streams from Glastonbury, even for our news coverage and BBC Parliament.

“And then they went on to discover so much more of our offer. So that the combination of live and on demand, led to our most successful summer on iPlayer ever.

“And so in the year ahead, we’re taking iPlayer up another gear. We’ll draw mass audiences in for the Euros, the Olympics, Glastonbury’s 50th anniversary and the Cricket Hundred and then they’ll find an unprecedented choice on offer. Just think of the numbers we’ll be bringing to your shows.

“The pace of change is staggering. We’re seeing how much young audiences especially want to watch both live and on demand and expect shows to be available for longer.

“Let me share a few recent examples with you.

“Ghosts is a brilliant comedy from the Horrible Histories team. Episode one got 2.5m overnight - a modest figure for a comedy - but within 28 days it had grown to 5.5m. And after six months 1.7m iPlayer requests. That’s up there with other big comedy hits. We’ve commissioned two more series straight away.

“Or look at BBC Three’s powerful documentary about Jesy Nelson and cyber bullying. It aired on BBC One but within 30 days it had broken all records on iPlayer for BBC Three factual, and we’ve got 11 more months for others to hear what Jesy has to say.

“Take Peaky Blinders… after 28 days episode one consolidated at 7.4m with over 5m requests on iPlayer, some of the biggest we’ve ever seen for young audiences - and with every series available exclusively on iPlayer these numbers are growing every day. Since the past series went up in July, the full five series box set has had 42m requests.

“We dropped Killing Eve 2 as a boxset on day one and used the weekly transmission to drive people to iPlayer. Both series combined have now had more than 100m requests.

“RuPaul’s Drag Race is a big bold game changing BBC Three commission - the likes of which we’ve ever seen before at the BBC. We launched last week exclusively on iPlayer. Around the UK people held RuPaul parties. By the end of the weekend we’ve had over 1m requests.

“Perhaps the most exciting thing about all this is that it changes what we’re commissioning. We can see there’s real appetite for stories outside the mainstream, with new and original things to say. Stories that really mean something to British audiences.

“Because most crucially of all - we uniquely know who your audience is - who you’re actually trying to talk to. Now that is an amazing gift.

“And by putting your shows on iPlayer for longer, we can grow that British audience.

“Your programmes become more and more successful and audiences get more and more value from the licence fee. We won’t let your work disappear without trace down the back of a global VoD library. Far from it. Because my only interest is to make sure your work is seen by as many people as possible and has impact.

“And greater success on the BBC leads to global success and greater commercial value too.

“This is the vision we’re working towards. No one else will have that breadth of genres and range of stories to tell, made by British creatives for British audiences.

“But of course, none of it can happen without one thing - your talent. And I want to put you at the heart of everything we do.

“We know that making a commitment to iPlayer means renewing a commitment to be your very best backers, your best partner and your strongest supporter. We’re committed to you for the long term, supporting you throughout your career.

“Whether you’re starting out or you’re clutching an armful of awards, we want to be your home. The BBC belongs to all of us. We are part of a community of work that matters, so it’s up to all of us to define the BBC of the future.

“We’ve always been the best place for the biggest shows to get the whole country talking. But we know we have to work harder to be the best home for new voices, and the safest place to take risks and create new work.

“We’re not driven by commercial imperative. We are here to back the stories that frankly the market isn’t ready to support. We’re driven by the desire to push creative boundaries. We’ve got the capacity of spirit, of authorship and ambition. And I promise we will match yours every step of the way.

“And being public service matters to this - it shouldn’t be our justification, in fact it’s our superpower in the most invigorating and imaginative sense.

“But we want to be there for you to make your best work. We won’t think in slots, genre, length, or any one size fits all terms. iPlayer brings a new found freedom and we can be agile and full of surprises.

“The BBC is your creative playground. We all know the BBC values but what really matters is what those values enable freedom, imagination and engagement.  Being able to make work for Somebody not Everybody. Being able to take risks. Working for stakeholders, not shareholders.

“You are a reminder that the BBC is the only place where the most successful British creatives still rub shoulders with the most exciting new voices - whether it’s here tonight, on iPlayer, or in our channels and schedules.

“So I want to put in a big ask to those in the room - who’ve made such an incredible mark on our industry - to help us support the new generations coming through.

“We’ve started putting together a film for the BBC’s centenary, which celebrates the role the BBC has always played in supporting British talent.

“It’s just a start, and we’ll be calling on you all for your stories. But I want you to think of it as a promise, as a commitment to doing even more in the future. Supporting, nurturing and empowering British storytellers has never mattered more to the creative industry in this country or to the BBC.

“Thank you everyone. And I can’t wait to keep working with you all on this amazing iPlayer journey. Enjoy your evening.”