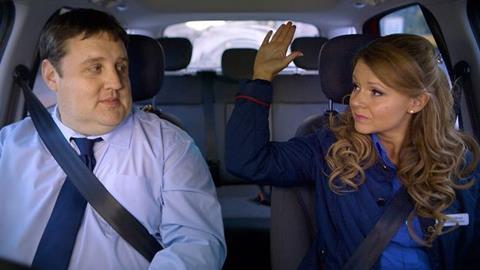 The premise of BBC comedy series Car Share is simple enough: two colleagues (played by Peter Kay and Sian Foulkes) are forced to travel to work together as a result of a company car share scheme.

But with the action taking place inside a rather compact Fiat 500, the technical setup required to film the Goodnight Vienna production was anything but straightforward.

“I’ve been involved with the build of a number of bespoke rigs over the years, and a couple of reality-style shows based in cars and taxis, but nothing quite like this one,” says Martin Riley, co-founder of Manchester production company Lion Eyes TV, which looked after the build and operation of the five-camera rig.

At first glance (click to enlarge picture), it appears as though six cameras were used in the rig, but what appears to be a camera below the rear view mirror is actually a reflection of the camera positioned just above the gear stick.

Shooting through a separate mirror positioned at 45 degrees was director of photography (DoP) Jeremy Hewson’s “genius” idea, says Riley. “That enabled us to use a longer lens and get a shallower depth of field to complement footage from the other four cameras.”

Lion Eyes opted for large sensor cameras to realise the aim of Kay, who also directed, to create the same look as a drama production. The cameras also needed to be capable of recording long, uninterrupted takes and be operated remotely.

“We looked at a number of options, from Red Epics, through to smaller sensor devices, Blackmagic Design’s range of cameras and mini cams,” says Riley.

“We disregarded the Epics because of their high power consumption, heat generation and the noise of the fans during long takes; we felt that five fans kicking in at one time in the confined space of the car would have made the audio unusable. And we rejected any smaller sensor cameras for aesthetic reasons.”

“Jeremy and I had used them in many other productions and they had proven reliability, we could get them in PL mount versions and they had low power consumption. The slim and tall form factor of the cameras also meant we could mount them inside the car without them getting in the way of the cast members.”

Camera focus and aperture were controlled wirelessly by three focus pullers who were based in a scanner truck that also towed the kit-filled car.

In fact, everything in the car including the Gekko Kiss and Karess LED lighting system, Rode condenser mics, recording rig and monitors, had to be remotely controlled from the scanner truck to help cope with the ever-changing light and weather conditions.

The production team wanted a higher data rate and longer record times than those offered internally by the Canon C300 and C100, so they designed a recording rig based around the Sound Devices PIX 260i.

“It also offered a codec that worked well for post-production and provided some redundancy in case of any drive failure,” says Riley.

Kay, who along with Foulkes also co-wrote Car Share, was able to review shots from each camera via a monitor (next to the gear stick) fed by a multiplexer from the mobile scanner.

“Like any bespoke design and rig this wasn’t a solo effort,” adds Riley. “It was collaboration between a whole gang of talented professionals. We also had the support and knowledge of some great manufacturers especially the software team at Sound Devices who worked tirelessly with us on the project.”

The rig took around four months to pull together, including three months of camera testing and four weeks testing and refining other kit and building the rig.

“If there’s one thing that I would take from this project is that it really doesn’t matter what equipment you use, how much technology you adapt or how ‘ground-breaking’ the approach is,” says Riley.

“It’s really about finding the best way to make a particular show, and how you help the director, writers and producer realise their vision.

“Put simply, we were tasked with filming two people in car and the real challenge was making what is a very complicated rig feel simple and effortless in the final programme.”

Picture and audio post-production of the six-part series was carried out by Salford facility Core Post.

With multiple passes needed for the various elements and layers of the programme, each episode took around four weeks to offline edit.

Matt Brown completed the bulk of the offline edit, which Peter Hallworth also worked on. Their efforts focused on the dialogue, but they also built in reverse material of the two protagonists that was shot from a second car as well as ‘up and past’ shots and other traffic and town-related cutaways.

A radio pass, where fictional radio station ‘Forever FM’ (created by MediaCityUK-based audio production firm Kalua) was weaved in and around the dialogue, was also required.

A large amount of time was factored in to the offline stage to allow Brown to composite hidden VFX to fix things such as shots of traffic that weren’t busy enough, traffic lights that displayed the wrong colour or shots of exterior action that didn’t tally with the rest of the scene. AOB Motion worked on some VFX, including background signs and the dream-sequence music videos.

The audio post team, which consisted of dubbing editors Tony Greenwood and Emily Nuttall and dubbing mixer Ashley Jane Brown, added indicator, wiper, and handbrake sounds along with the noise of an engine (which was never running during filming) and exterior car sounds that had been muted by the location recording team to keep the dialogue as clean as possible. iZotope’s RX Advanced plug-in was used to de-noise the dialogue.

The ‘Forever FM’ radio tracks were mixed around the dialogue and used to punctuated ends of scenes. Through a mixture of EQ and convolution reverbs, it sat away from the level of the conversation whilst still having the desired effect of presence.

The pictures were finished in Blackmagic’s Da Vinci Resolve by Matt Brown. The changeable weather and unavoidable light changes made for a challenging grade, but Brown said the well-shot footage provided enough range to create an even look.

Kit hire and cabling No Drama