UKTV’s comedy station had a flyer of a year. Reaching more than 22 million adults a month, Dave is now the eighth-biggest commercial channel in the UK and grew its audiences by 4% in 2015. 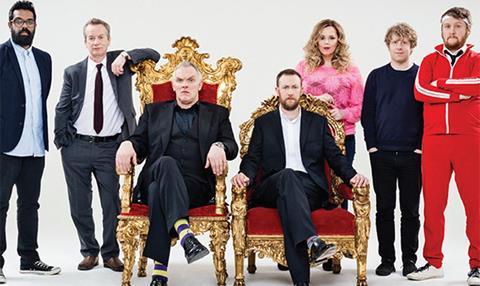 The only non-PSB channel to make the Channel Of The Year shortlist at the Broadcast Awards 2016, UKTV’s comedy station had a flyer of a year. Reaching more than 22 million adults a month, Dave is now the eighth-biggest commercial channel in the UK and grew its audiences by 4% in 2015.

In no small part, this was down to putting money into some smart commissioning. The channel boosted its originations budget by 70% in 2015, scaling back its BBC repeats to host new shows including Taskmaster (main pic), an adaptation of Alex Horne’s live show that provided an anarchic but warm-hearted showcase for a variety of established and up-and-coming comics. It was also the most-watched UK commission on on-demand service UKTV Play. Alan Davies: As Yet Untitled (inset), now in its third series, also featured new talent in its loose, intimate chat show format.

Meanwhile, UKTV supersized North One’s Storage Hunters UK for its fourth series, including a celebrity Christmas special that attracted 1 million viewers, to fill some of the gap left by the cancellation of the hit US version. This was also the year in which Dave added live boxing to its multi-genre mix, plus multiplatform stunt show The Indestructibles, from Factory Media.

The package was a hit with the judges. “Dave has a clear identity and launched new shows with ratings success,” said one.

Sitting alongside E4’s US ratings smash The Big Bang Theory were some new homegrown favourites, including Michaela Coel’s much-garlanded comedy Chewing Gum and breakout format Tattoo Fixers, plus hot US drama Empire. The general election, meanwhile, allowed E4 to flex its comic muscles, with regular programming replaced by ‘Darren’, the man in charge of making sure E4 is on air, sitting at the controls doing nothing on polling day.

The ‘funny as Fox’ on-air campaign celebrated a new streak of grown-up animation on the channel in 2015, with a Thursday night Adult Swim block featuring cult hits Rick & Morty and Robot Chicken. New drama came in the form of Wayward Pines and Agent Carter, while The Walking Dead fans were served up companion series Talking Dead, which played in a double-bill with the latest episode of the zombie drama, just 24 hours after the US TX.

Geordie Shore and Ex On The Beach helped MTV score its highest share of 16 to 34 year-olds in a decade. The former achieved its best ratings yet, becoming MTV UK’s longest-running reality show, and second only to Game Of Thrones with that age group in pay TV. New formats included dating format Car Crash Couples and Judge Geordie, a vehicle for Geordie Shore’s Vicky Pattison.