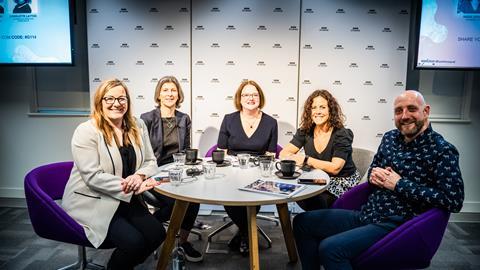 How to encourage more women into TV tech roles

In what felt like a very different world – a few weeks before lockdown – on 10 March 2020, Broadcast hosted a lively, insightful debate at Stage 1, BBC Television Centre, to discuss the role of tech in transforming TV production and to celebrate the female talent across the TV tech sector.

The roundtable debate was held to mark International Women’s Day and staged in front on a live studio audience and live streamed across the BBC. It featured a panel of leading women in TV, with representatives from UKTV, M2A Media, The Farm Group and Rise, and was chaired by Broadcast Tech editor Jake Bickerton.

The discussion focused on the tech innovations driving sweeping changes in the TV industry, from production through to post-production and distribution.

The panel debated the dominance of streaming services and the rise of direct-to-consumer platforms, the explosion in cloud computing, automation and machine learning, and investigated how these new opportunities could help address the gender divide, especially when it comes to tech-focused roles in television.

Below is a selection of highlights from the 60+ minute discussion.

JAKE BICKERTON: How is technology changing the TV production, post-production and distribution sectors? What have been the key changes?

SINEAD GREENAWAY: Even 10 years ago, we were all linear broadcasters living in a technology bubble – we went to the same trade shows, we bought the same kit, we all knew each other. Now platforms have changed and so have routes-to-market, with the explosion of SVoD and our own direct-to-consumer offerings. 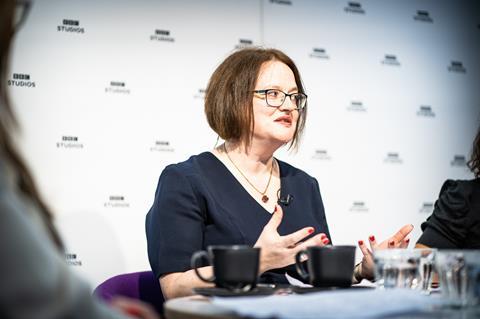 And many of these SVoD businesses were born in the cloud. And they’re all using generic technology – you are no longer tied to a vendor community. The capability that has afforded us, in terms of processing power and meeting our business objectives, has also changed.

As part of BBC Studios, we’re now included in a much bigger international supply chain. It has been transformative having our content in the cloud, where it can be accessed anywhere in the world, allowing us to be far more agile.

JB: What do you store in the cloud?

SG: Content, as well as everything else. We were even running channels for a competitor for a while. We are multi-cloud and have different cloud working behind our estate. This enables more flexible working and more remote working practices. At the other end, starting with your library and your metadata and working your way through is a sensible place to start.

Cloud has also helped as we have undergone a change in ownership. What took us 11 months to move from LTO storage took us a week in the cloud.

JB: Marina, what’s your perspective, from a cloud native company? 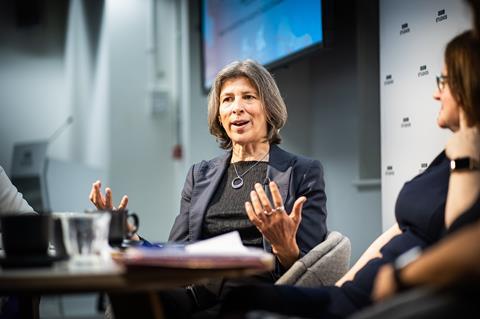 MARINA KALKANIS: As a start up, we would not exist if we didn’t have access to cloud technology. Before cloud you would need to have invested in the infrastructure even to get to the point where you could start looking for customers. It was a barrier to entry. Now we can get started immediately. One of our first customers was Channel 4 and we were able to meet their brief within a couple of months. The broadcaster had just won the rights to show Formula One and needed a live capture and VoD catch-up service, which could delver VoD as soon as the race had finished. That is the perfect cloud solution: the races are only once a month so you don’t want to invest in the kit, but when they do happen you want to throw as much processing power on it as you can.

SADIE GROOM: And with the cloud you don’t necessarily have to be in the same location. We are an industry of networkers – to be able to have a meeting with someone in the US and put that brainpower together – that’s something that wouldn’t have happened five years ago.

SG And it enables you to fail and learn without losing too much, whereas with heavy infrastructure you have to plan to a large degree, and it has to work as there’s no other option.

CHARLOTTE LAYTON: Being able to try things out is really important. As a service provider, we’re constantly coming up with solutions for clients and thinking ahead in terms of what they might need. That involves trial and error along the way. Cloud also helps us meet another one of our business objectives – to enable the production chain to become more sustainable by harnessing cloud capabilities and remote editing.

MK: Do you think that timescales have become more compressed? Things that perhaps in the past people planned to do in months or years are expected to happen in days?

CL: In the post-production word, it’s almost the opposite – the expectation of when a series is going to drop has changed. Things tend to stay in the editorial phase for far longer and the data is much bigger. The challenge for us is where do we keep it all.

JB: Do post-production houses still have to invest in more and more storage?

CL: We’re constantly investing in storage and trying to manage expectations in terms of moving things around the schedule so that they don’t bottleneck. For us it’s about trying to educate our partners – in a positive way – to manage what they’ve got. Film and tape were finite, now it isn’t.

So, it’s about bringing back those old school values and disciplines, which have their place to play around new technology enablement.

JB: The growth of streaming services such as Netflix and Amazon have generally been greeted as quite a positive thing in the post community – do they see the value of post-production more than traditional broadcast clients? 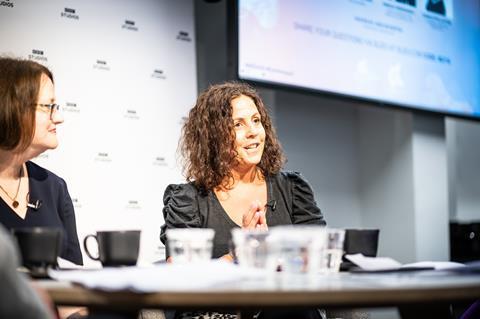 CL: These platforms are not paying more - they are paying a fair price for what they’re getting. They are creating content at a different scale. The SVoDs are all delivering in UHD, SDR, HDR and Atmos whereas in the broadcast world it is still mainly HD. There is a price differentiator, but that’s because it is a different product.

SG: The growth of peripheral services that are required to cater for these platforms has been interesting. Localisation services – often underrated by broadcasters – have become critical for SVoD partners. That we can produce multiple versions and provide greater access is now really important. This has also driven technology development in that space – for example using AI or voice recognition.

MK: We’re finding that it’s much easier now to collaborate with access services, machine learning and metadata service providers that offer the next layer above our video services. We look after a lot of sports content, for instance, which involves automatic clipping, and because we’re cloud-based we can easily provide the live streams directly to the clipping company, it’s all there.

SG: The whole concept of partnerships is a new thing. You might visit a trade show where there are hundreds of vendors, but partner networks can help you navigate the potential interconnectivity of the supply chain in a world where you don’t recognise the manufacturers. That’s helpful if you are a buyer.

SGroom: It’s about getting different people in too. The TV industry is not as scared to embrace the IT sector or games industry. There are so many companies now that are using gaming technology in broadcast. For example, studios powered by gaming engines are being created after looking around and not being able to find what they need within the broadcast sector.

JB: How have automation and machine learning changed things?

MK: They don’t replace the human element, but they do add efficiencies and eliminate tedious tasks. The tech is not used to make the final cut, but it gives the editor more options. And that applies to gathering metadata. You can’t use machine learning for subtitling yet, but if you do speech-to-text it can take you a lot further.

JB: The broadcast technology industry tends to be quite male dominated. How can we improve the gender balance? And how can business be improved by having a more diverse workforce?

SG: At UKTV we’re 60:40 female although it’s the opposite on the technology and operations side. As a wider industry, women account for 17 per cent of the technology industry workforce. Where we’ve found most success at UKTV is by looking at transferable skills.

We used to be known as the operations team and were responsible for the stuff that you process. But this team of people are effectively technical staff now and the tools they’re using are technical.

CL: There are plenty of jobs that nestle alongside technology where you don’t necessarily have to be a technical person, per se, but you can be curious about technology and can explain, in human terms, all that really clever technical stuff. That’s a real skill and something women are particularly good at.

SG: I also think that we need to stand up, give more talks and be representatives for our craft and technology. 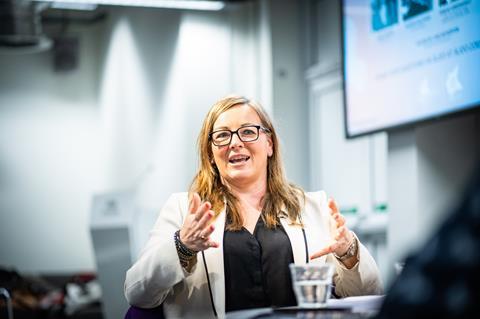 SGroom: I’d like to see a rise in the number of women on technology panels or being quoted in articles, generally having more of a presence. But it’s challenging – sometimes we have to rack our brains slightly so that we don’t use the same people as speakers for events. And that’s a confidence issue: you might not know everything about the subject matter you’re being asked to speak on, but my advice is to just do it – a man would! We need women in the industry to take more risks.

MK: We have a lot of software engineers at our company and that’s where we really struggle with diversity. When I was a software engineer people didn’t come out of university with software degrees. I came out with an English degree and got trained by my employer. In the intervening years women have fallen away because men enter with more skills already under their belt. They’ve developed an interest earlier, they’ve got the degrees in the subject, so they have an advantage. Add to that the confidence and fear factor, which is where we need to over index and support women.

SGroom: And if you’re not seeing any female leaders, head of sales or engineering then how can you aspire to be one? At Rise Up, we’re running a scheme now involving 25 primary schools and backed by Sky, BT Sport and ITV for 9-11 year olds in years 5 and 6 – both girls and boys – because we have a massive skills shortage in the industry.

We’re briefing these pupils about the industry and its various different roles and then they get to build a TV studio and produce a game show.

There will always be those young people who want to be in front of the camera but the message is that there are plenty of behind-the-scenes technical roles you can do. You don’t have to be that skinny person on Love Island to work in TV.

SG: There’s never been a better time to get involved in the diverse and evolving roles in the broadcast technology. It’s incredibly exciting and rapidly transforming our industry, taking us into the next era of TV. 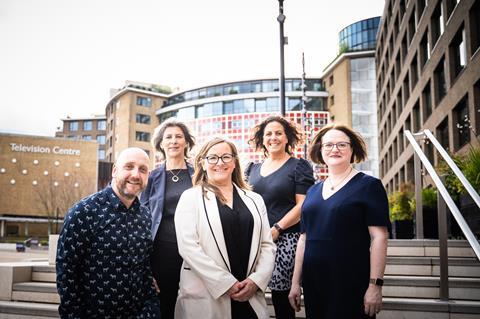