Broadcasters gear up for 7 May

Broadcasters are improving their virtual sets ahead of next week’s general election, with the BBC set to debut a new Steadicam-operated virtual reality tracking system for its live coverage. 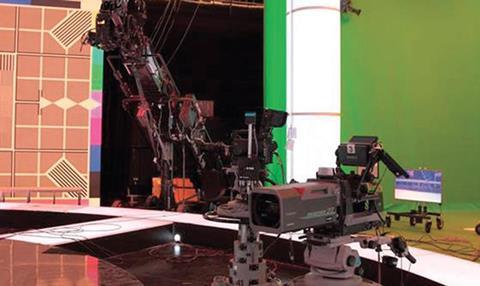 The BBC’s broadcast on 7 May will be its first use of the Mo- Sys Space Tracker system, which was only shown in public for the first time at NAB earlier this month.

It follows BBC Studios and Post Production’s use of the company’s crane-base Star Tracker system, which also allows virtual reality and augmented reality graphic effects (GFX) to be placed onto a camera feed, during last year’s local elections.

The wireless Steadicam system will be used to create expansive virtual sets for the broadcaster’s team of presenters and will be able to cover most of BBC S&PP’s 11,800 sq ft BBC Elstree Studio D.

BBC S&PP has also upgraded the GFX cards in its HP Workstations to provide extra processing power to support the coverage.

ITN chief technology officer Bevan Gibson said the bulk of its preparation for ITV’s coverage of the election also involved “signifi cantly” increasing the amount of processing power that drives its virtual sets: “An increase in video inputs will give the creative teams fl exibility to do more with the virtual sets and display more information. These machines are now far more capable in terms of polygons per second.”

The BBC, ITV and Sky will all use Vizrt kit to generate lowerthird and full-frame graphics, as well as their virtual sets.

Sky News head of design Chyaz Buffett said one of the biggest changes to the broadcaster’s studio operation for the general election relates to the way it handles the results data that will populate its GFX.

“We have written new code for our CMS and API to drive elements such as the data wall and lower-third GFX and, for first time, it will support the website, mobile app and tablet - everything on the digital estate,” he said.

The new CMS was operated “in anger” for the first time during the Scottish referendum, and promises greater speed, accuracy and consistency, Buffett said. He added: “The same data will hit different platforms at the same moment.”