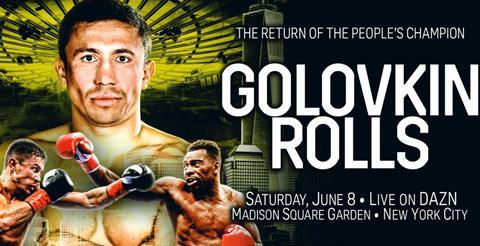 DAZN has made the third in its series of 40 Days boxing docs. This one comes out ahead of Gennadiy “GGG” Golovkin’s debut on DAZN against Steve Rolls at Madison Square Garden on 8 June.

The short doc series, which takes a behind-the-scenes look at the build-up to the Golovkin vs. Rolls fight, is being made in partnership with Mark Wahlberg’s Unrealistic Ideas production house and film-maker Peter Berg’s Film 45.

Wahlberg and Berg are both avid boxing fans and have further links with boxing, with Wahlberg starring as Micky Ward in The Fighter and Film 45 producing the On Freddie Roach boxing docu-series on HBO.

DAZN’s 40 Days strand has so far covered the run up to its Canelo vs Jacobs and Joshua vs Ruiz fights. The latest series charts the preparation for the fight between middleweight world champion Gennadiy “GGG” Golovkin and undefeated challenger Steve Rolls. GGG Promotions and DAZN recently announced the six-fight global partnership that will see Golovkin fight the remainder of his career on the platform.

Wahlberg said: “As a longtime boxing fan, I am excited to be partnering with DAZN to highlight Gennadiy and his unique approach leading up to a fight.”

Golovkin added: “It takes a lot of hard work to put on the big drama show. 40 Days was in training camp from start to finish. Boxing fans will see it all.”

Meanwhile, Jamie Horowitz, EVP Content DAZN North America, said: “40 Days is a series that links world famous boxers with gifted storytellers to give fight fans a unique view of the arduous eight-week preparation for a fight. When we visited GGG at his camp in Big Bear, we asked him whom he thought would best tell his story – he immediately asked for Mark Wahlberg and Peter Berg.”