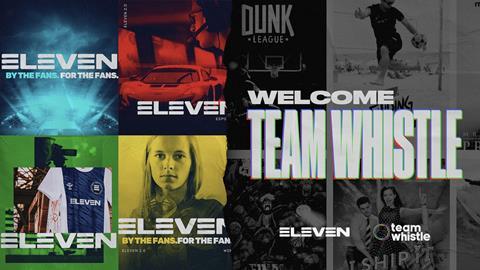 The Eleven Group aims to house an extensive network of OTT and social platforms; proprietary streaming technology; data driven production capabilities; and marketing and brand partnership services, and will now look to secure more live sports content and developing new on-demand sports and entertainment programming. This strategy began in earnest with the acquisition of MyCujoo in 2020.

Team Whistle’s on-demand content includes Dude Perfect and F2 Freestyling, and its portfolio of unscripted, scripted and interactive shows are available across its social and AVOD media distribution network.

Aser founder Radrizzani said of the deal: “We have long recognised the opportunities for partnership between Team Whistle and the wider Aser portfolio. By welcoming Team Whistle into the Eleven Group, we are bringing together two media companies who have a track record of building strong and innovative sports media businesses in Europe, Asia and North America. We will also be adding transformative new scale and capabilities to Eleven.”

West added: “Upon first meeting Andrea [Radrizzani] years ago, we shared a common bond on how sport and entertainment were being reimagined and now with the pace of media transformation happening at an accelerated rate globally, joining forces with Eleven allows us to create a truly unique, global media powerhouse.”