How O21 Television provided technical facilities for coverage of the final leg of the Red Bull X-Fighters World Tour. 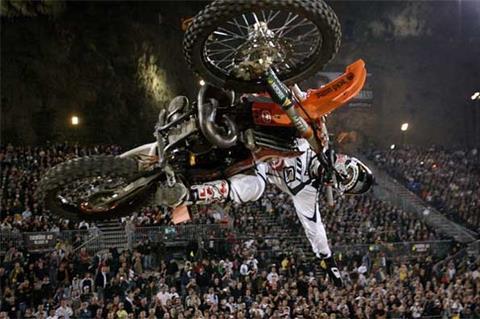 The world’s best FMX riders descended on the former coal power station at Battersea for the finales of the Red Bull X-Fighters World Tour.

The instantly recognisable landmark was an integral part of the event production, creating not only a stunning backdrop but also one of the most difficult sites to have 18,000 spectators for the first time ever.

The show was broadcast live to 15 countries around the world, transmitted in HD to 16 Vue Cinemas and streamed into two FCP edit suites for compliance checking. An “As Live” version was also made for Dave in the UK.

James Clement, who headed up the project for O21 said: “Red Bull’s innovation and willingness to attempt what most would look at as being impossible was a refreshing attitude to work with. Through dirt and dust came an amazing show which gave O21 the opportunity to show that quality of service is key. The show was one we are proud to be a part of.”

The Red Bull X-Fighters London final will be broadcast on Saturday 29 August at 10:00 in a one-hour highlights programme on Dave.