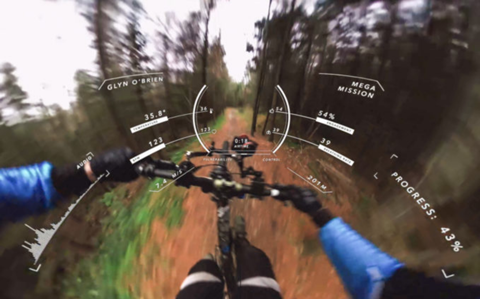 Sensum placed biometric sensors on the riders to collect real-time data on their physiological changes as they rode the extreme downhill trail in Ireland. At the same time, Red Bull Media House used bespoke spherical camera lenses to record 360-degree video from each rider’s first-person perspective.

The resulting production, The Hero Feeling, made it possible for the viewer to select between different riders, trails and types of runs. While experiencing the ride in VR from the biker’s point-of-view, the view was augmented by biometric and contextual data synchronised in real-time, both from the riders’ bodies and the environment around them. This was displayed as on-screen graphics showing the rider’s emotional state on a second-by-second basis.

Red Bull Media believes, “Seeing how the rider feels brings the audience closer to the thrill of being a world-class mountain biker.” See for yourself in the clip below.

”For the first time technology allows us to measure emotional response in real time and connect audiences directly to it,”

The film is part of Red Bull Media House’s drive to “explore innovative new ways to connect the emotions of Red Bull ‘Heroes’ with their audiences across various media channels.”

Sensum is able to measure emotions using data from biometric wearables and mobile technology. It has built ‘Emotion AI’ analysis tools that can derive emotions not just by measuring a person’s physiological changes but also from changes in contextual data that can be gathered from a wide range of sensors and devices.

For The Hero Feeling, Sensum developed an Android app that triggered and recorded multiple data streams from GoPro cameras, microphones and biometric devices. The data was processed in the cloud to produce the content.

“Emotion has always been the key driver of any story or experience but now for the first time technology allows us to measure emotional response in real time and connect audiences directly to it,” said Gawain Morrison, CEO & Co-Founder, Sensum.

“Making use of Sensum’s Emotion AI Toolkit was a no-brainer for us,” adds Andreas Gall, Chief Innovation Officer, Red Bull Media House. “It’s played a key development role in some of our latest projects, such as harnessing biometric data to create emotionally engaging content and virtual reality experiences.”