For C4’s latest fixed-rig series, indie Twofour follows the pupils at a Harlow comprehensive school through the triumphs and traumas of their final year. Ben Dowell meets the crew. 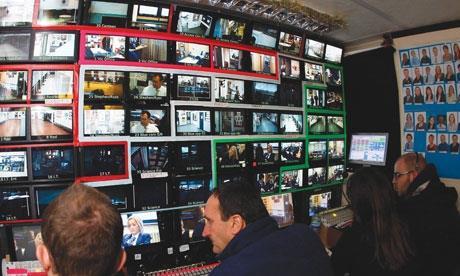 Listen up at the back. Are you chewing? Eyes forward, sit up straight. And stop sniggering.

It is December 2010 and seven TV professionals assembled by indie Twofour are sitting in three draughty, harshly lit prefabricated buildings at Passmores School in Harlow, a mixed comprehensive of around 900 pupils.

As any state school alumnus knows, these are the rooms where boring geography or French lessons take place. But here, adults, rapt with attention, sit in front of a gallery offering not maths but masses of monitors and a busy crew. In one control room, they’re staring intently at a pretty young teenager called Ashleigh, who was talking in class behind the teacher’s back. Brilliant. Just what these grown-ups wanted.

“Zoom in on Ashleigh for a while,” says director David Clews in a rare moment of an adult welcoming classroom naughtiness. “She’s been talking for a while, she’s saying something. I want to catch it.”

Classmates is Channel 4’s latest fixed-rig series. Twofour chose Passmores from 40 schools around London and the south-east because it seemed so representative of modern state schools.

C4 and Twofour were also impressed by the staff, including Stephen Drew, the camp, charismatic deputy head, who could be seen on another monitor in his office, trying to eat his lunch while ticking off a young boy who had been sent to him. Mr Drew, the school’s chief disciplinarian and the charismatic central character of episode one, couldn’t see another miscreant pulling faces behind his back.

“Passmores is representative of every school in the country in a way,” says Clews, who, in common with everyone else on the shoot, is full of praise for the staff. “The head was quite open - he said it was quite a normal comprehensive school and, in many ways, it will make people remember their own schools.”

The head teacher in question, Vic Goddard, agreed to take part because of his confidence in the school - rated ‘outstanding’ by Ofsted - and the work he is doing in an area with more than its share of deprivation. It was, Goddard reasoned, likely to offer a new experience for the kids as well - or, at least, apart from the handful of pupils and staff who asked not to be filmed. Photos of each were clearly on display in the control room.

The series is also the latest in the long line of the fixed-camera ob docs they seem to love at Horseferry Road, following on from the likes of The Family, One Born Every Minute, The Hotel and 24 Hours In A&E. It depicts the rough and tumble of school life and aims to show viewers the dedication and good nature of the staff.

For Clews, the fixed-camera technique is “still evolving”. But it is capable of capturing school life in a way never seen before, especially given the availability of ever smaller and cheaper cameras.

Clews and series producer Beejal Patel, both of whom worked on The Family, were struck by the difference in scale between the two projects.

“The Family had hidden cameras in 10 rooms - this has many more than that,” says Clews. “It’s a new technique, having fixed cameras on the wall in this way. It’s still a documentary series that’s observing life.”

While the quest to gain quality, exciting, meaningful television from fixed cameras is shared by all of these series, there is a particular accent placed on the way the team go about the business of gaining the trust of non-media savvy, sometimes quite vulnerable, young people.

Preparation was very careful, with two months of research, watching lessons and getting a feel for the school. During the seven-week main shoot, 62 cameras were erected around the premises in the October half-term and filming took place for what the production team hoped was the most “normal” part of the year, when the syllabus was being taught and pupils weren’t revising for exams. In addition, the cameras filmed the first days in September and were on hand to cover GCSE results day last month.

Each day, 22 microphones were allotted to students and teachers, depending on the location of the lessons with the hottest narratives.

Around 30 hours a day were taped, giving 150 hours of footage per week. Over the seven-week shoot, this made for more than 1,000 hours of footage from the rig alone. Many hours were filmed before and after the key period before Christmas, when the classroom filming took place.

The students “mucked about” a little bit for the first few days, says Clews, but one of the advantages of the technique was the unobtrusiveness of the cameras. “They forgot about them after a while,” he says.

With 15km of cables in and around the school, there were initially fears of school-room sabotage, but thankfully, they were not realised. In fact, the school reported a complete eradication of thefts and vandalism during the shoot, when cameras were watching every move.

Certain sensitivities had to be respected, however. Sex was not off-limits, given the typical pre-occupations of 16-year-olds, says Clews, but sexual themes had to be handled sensitively. Similarly, inter-pupil bitching - what producer/director Hannah Lowes called the unavoidable “he said/she said” aspects of adolescent life - had to be treated carefully.

The remarkable and surprising details and nuances of the young people’s lives stand out. But what surprised the production team the most is how positive the relationship between the teachers and students is - and how committed and decent the teachers are.

“In my day, there was respect, but here, there is also a friendliness,” says Lowes. “They seem to know a lot more about their lives than I ever did and talk to them in a more friendly way.”

Clews adds: “Not all the students are perfect, however, and some have difficult home lives, but I think it’s a series the school should be proud of.”

A valuable lesson indeed. And if episode one is anything to go by, a hit for C4’s autumn term.

As well as capturing school life with the fixed rig, the crew filmed in specially set-aside pre-fabricated classrooms, where children could be interviewed, mainly at lunchtime and often in groups, to capture what series producer Beejal Patel calls the “group dynamic feel” of school life.

Among those keeping a close eye on the storylines was producer/director Hannah Lowes, who spent time with the kids after school. She was part of the teams that liaised with the students, often going home with them and hanging about after hours. They had to work in pairs because all the pre-GCSE kids were legally minors and had to have at least one other adult present at all times.

“Around 20 or 25 were on our radar and my job was to get under their skins and get their trust,” says Lowes. “It was a very important time in their lives and they were going through some big changes.”

For Lowes, the experience was evocative, reminding her not least how cold it often is for pupils who can’t congregate in pubs and don’t have the disposable cash to sit around in cafés. “There was a lot of hanging around and not many places indoors you could do it,” she says.

Her method was to tell it to the children straight. “There were some wobbles and some were really worried about how they would come across, but I always told them that if they didn’t behave like idiots, they wouldn’t be presented as idiots. I also told them that this wasn’t their path to Hollywood and they wouldn’t become the next Jade Goody through it.”

Summary Series following a group of final-year GCSE students through the most important year of their lives.