Turning a lucky-dip-bag toy product into a compelling story for upper pre-school girls was the main challenge in creating Magiki, according to Eryk Casemiro, chief creative officer of Zodiak Kids Studios. 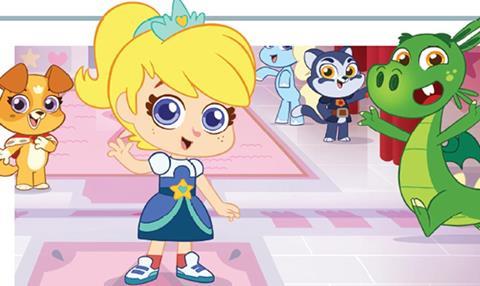 Made by the French superindie’s parent De Agostini, the Magiki range of pandas, puppies, dogs and princesses has shifted more than 17 million units to date.

US-born Casemiro, whose showrunning credits include Rugrats, As Told By Ginger, Olivia and The Little Miss and Mr Men series, says the way in was to tap into the world of fantasy play and create a world in which Billie, a trainer-clad seven-year-old in a princess dress, works out issues she’s having at home with her elder twin siblings.

“Kids aged between four and six often use toys to work through issues and that is the construct of the show,” he says.

“Billie loves her older twin sisters Marie and Antoinette, but sometimes they can be a bit mean or dismissive and she doesn’t always know how to react. Billie is then transported into the Magiki world, where her toys become her subjects and her best friend is her counsel.

“Through acting out her play, she gains greater understanding of her world at home.”

The 2D Flash animated series is set to air on Gulli in France, Planeta Junior in Spain and DeA Kids and Super! in Italy, while a taster at Kidscreen in February has attracted interest from North American and Australian markets.