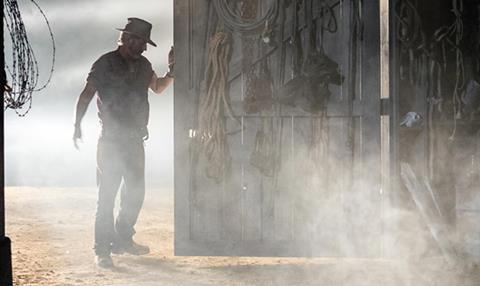 The horror genre has been slashing through the schedules of broadcasters around the world for several years, with series such as The Walking Dead and American Horror Story becoming incredibly valuable franchises.

Zodiak Rights will hope that its television adaptation of Wolf Creek can join them.

The six-part series is a followup to the 2005 Australian slasher flick, which starred John Jarratt as murdering psychopath Mick Taylor, who killed a number of backpackers in the country’s outback.

Jarratt returns as Taylor for the series, in which he is joined by 11.22.63 star Lucy Fry as American college student Eve Thorogood.

The sole survivor after her family is massacred by the knife-wielding killer, she vows to bring him to justice or die trying.

Caroline Torrance, head of international scripted at distributor Zodiak Rights, says: “The series is really interesting because it is this strong female character who hunts him. Hopefully he’ll get his comeuppance.”

Wolf Creek has been adapted by Greg McLean, who directed the original feature, Peter Gawler and Felicity Packard. It was produced by Banijay Group-owned drama indie Screentime, in association with Emu Creek Pictures, for Australian OTT service Stan.

Torrance says that Stan, a joint venture between Nine Network and Fairfax Media, is searching for its own House Of Cards.

“This is its first original commissioned drama. We’re seeing it everywhere with these SVoD services; they want a channeldefining series. Some of the most original series are being done by the OTT services.”

Zodiak Rights is launching the series, which is expected to air in early summer, at Mip TV. This will be the first market since the merger of Banijay Group and Zodiak Media, which led to Banijay’s distribution division Banijay International being merged into Zodiak Rights.

Torrance says she has spent the past few weeks “getting my head” around the Banijay scripted catalogue.

Rebellion is produced by Being Human producer Touchpaper Television for RTÉ, and tells the story of the creation of the Irish Republic during WWI.

RTBF’s 10 x 60-minute drama Public Enemy focuses on a man released from prison into a small village where a young girl suddenly disappears. The series has been selected to premiere at the Mip Drama Screenings in Cannes.

Torrance says that Zodiak hopes its long history of selling non-English-language dramas, such as French period drama Versailles, political thriller Occupied and movie The Girl With The Dragon Tattoo, will help it chalk up sales.